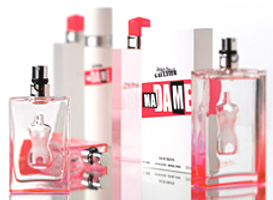 ...the fragrance targets a younger consumer than previous creations, and plays on the theme of the modern-day garçonne, or the rock-inspired tomboy—in line with Gaultier’s love affair with androgyny.

Ma Dame is described as a fresh floral scent. It was developed by perfumer Francis Kurkdjian, and the notes feature rose, grenadine, musk and cedar.

Jean Paul Gaultier Ma Dame will be available in 30, 50 and 100 ml Eau de Toilette and in matching body products. (via cosmeticnews)

Update: According to Women's Wear Daily, the notes also include sour orange. In the US, Ma Dame will launch on September 1st, and will be exclusive to Macy's through November.