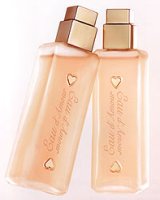 Jean Paul Gaultier Gaultier2 Eau d'Amour is packaged in a frosted bottle with heart shaped magnets. It will be available in 60 ml Eau de Toilette, sold as a single bottle or in a set of 2 magnetized bottles to share. (via cosmoty.de, moodiereport)