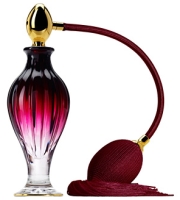 Christian Dior marks their 60th anniversary as a fashion house this year, and to celebrate, the house is jumping on the haute (luxury/exclusive/expensive) perfume trend. La Collection Particulière is a trio of limited edition perfumes created by designer John Galliano in collaboration with perfumer François Demachy.

La Collection Particulière Passage N°4 (shown at right) is described as a "sovereign rose, a fiery pimento, a journey, a garden".

La Collection Particulière Passage N°8 (shown below) is described as a "velvet violet, a sophisticated iris, a dream, a burst of laughter". 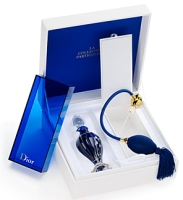 The fragrance bottles are based on an "original flacon designed for Miss Dior in 1947".