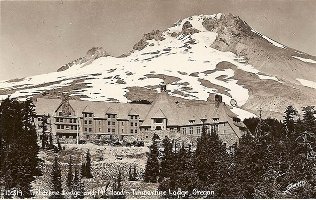 For its winter issue, a local food magazine asked me to interview the new chef, Jason Stoller Smith, at Timberline Lodge on Oregon's Mount Hood. The chef invited me last week to tour the lodge, follow him around a bit, and stay the evening for a winemaker's dinner at the Silcox Hut, a stone cabin a mile up the mountain from the lodge only accessible by skis or snowcat.

Timberline Lodge is a W.P.A.-era ski resort built of huge stones and mammoth timber, full of late 1930s art and textiles. Its newel posts are carved into animals, and Native American symbols adorn the chimneys. The Lodge sits right where Mount Hood, a volcano, transitions from forest to a moon-like, boulder-strewn landscape. As I packed to spend the night, I thought "lodge chic" and wavered between a Sonja Henie-inspired, muff-accessorized ensemble and a late 1930s, bias-cut black crepe dress with velvet appliquéd peonies. The chef had not very helpfully said the dinner's dress code was "casual formal." And, of course, there was the question of perfume.

What fragrance would feel right with the remote Lodge and yet not intrude on a winemaker's dinner? Lingering in my mind was M.F.K. Fisher's foreword to Angelo Pellegrini's book The Unprejudiced Palate where she recounted Pellegrini shunning her because he thought she'd worn perfume at a wine tasting (in fact, he was smelling the scented soap from his hotel.) I couldn't imagine having the experience scent-free, but I didn't want to intrude on anyone's enjoyment of dinner.

Finally, I decided on one spritz of Serge Lutens Chêne between the breasts on the theory that (1) a spritz in the morning would be faint enough not to bother anyone by dinner but would still fill my nose; and (2) if anyone did smell it, they would think it was the scent of the fire from one of the Lodge's gargantuan fireplaces. My back-up choices were Caron Tabac Blond, Ormonde Jayne Woman, and L'Artisan Parfumeur Havana Vanille on the basis on their natural, forest-like, or gourmand smells. (I went with the late 1930s black crepe dress, too, and packed a 1930s nightgown and Agatha Christie novel to complete the picture.)

Timberline Lodge was the model for Overlook Lodge in the movie, The Shining. Remember the opening scene, an aerial shot of a car driving up a winding, forested road? Now imagine a battered 1986 Nissan pickup on that same road, being passed by an R.V. towing a boat. That would be me in the pickup.

At 6,000 feet, I breathed more deeply to catch up on oxygen. My room had a fireplace and a king-sized bed with a feather bed, Pendleton blanket, and a stunning view of the tip of Mount Hood. The chef gave me a tour of the Lodge, then retreated to the kitchen, where he accessed Epicurious on his iPhone to find out how much flour to add to the gnocchi. Rabbit legs and Kobe beef simmered in the sous vide cook tub. My Chêne performed admirably — and, it turned out, suitably, since the Lodge's fireplaces were being relined and were boarded up. The only smell of roaring fire came from my cleavage.

As the day dimmed, the Lodge's staff took select guests up another thousand feet up to the Silcox Hut for dinner. Here a fire blazed in the gigantic fireplace at one end of the cabin. A long oak table set for 20 people and sparkling with votive candles and Riedel glasses stretched across the stone floor. Chef Jason and a sous chef hustled in the open kitchen at the opposite side of the room.

Each course of dinner was paired with two vineyard-specific Cristom pinot noirs, one fairly recent and one from an older vintage. Tucking into the bacon-wrapped halibut and sipping one of the pinots, it struck me: this particular wine tasted just like Guerlain Parure. I put down my glass in astonishment. Across from me was the Cristom marketing director. At my left sat a local wine critic. "Dried rose petals!" I said. "Plum, cigarette ash, and oak moss. I taste it!"

The marketing director started snorting like a truffling pig and motioned as if he were scooping dirt to his nose. "Yes, potpourri. And I taste forest floor." The wine critic launched a loud discussion of whether terroir trumps weather and tossed out a few French appellations to compare to each of the Cristom vintages. Not knowing much about wine, all I could think was that Nuits St. Georges would be an excellent name for a novel.

A studious woman across from me and to my right asked how I liked the wine. "I love it!" I said, thrilled by its Parure-like complexity. "What do you think?"

She said something about fruit and tannin and acid and ended with a pronouncement about how the wine died on her mid-palate. I stared back blankly, thinking, Honey, all I get on my mid-palate is your liberal application of Fendi. Meanwhile, my Chêne was faint but discernible to me, and a perfect match for the crackling fire.

After dinner, back at the Lodge, the evening was winding down and the Lodge had emptied out. The wine critic and I cadged a cognac from the bartender at The Ram's Head as he was shutting down. We sat at one of the couches near what would have been a fire had the fireplaces not been under construction and talked about the evening and about our writing careers.

"So, you write about perfume, yet you're not wearing any?" he of the discerning nose asked.