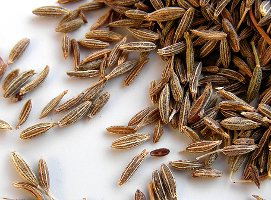 Few notes in fragrance are as polarizing as cumin. Some people associate cumin with sweat or food, and even the tiniest hint of it will cause them to double-bag a perfume sample and take it to the garbage can in the backyard. Other people, including me, like the carnal edge cumin adds to a fragrance.

For people who want to experiment with cumin-laced fragrances, I've put together this cheat sheet of a few perfumes and their ratings on the cumin-o-meter. I hope you'll chime in with your favorite fragrances, too.

Cumin-o-meter rating 1: Serge Lutens Chêne. Have you ever leaned your head toward a four-log fire in a fireplace that draws well and breathed deeply? Riding the heat is a touch of cumin. Chêne mimics the smell of an oak fire, but without the smoke. The pinch of cumin is there even if many people don't even smell it.

Cumin-o-meter rating 3: Vero Profumo Rubj Eau de Parfum. Rubj Eau de Parfum — not the Parfum so much — dirties its radiant orange blossom with a hint of cumin. The result is a gorgeously delicate fragrance with a raunchy kick, like a cherub telling dirty jokes.

Cumin-o-meter rating 4: Penhaligon's Amaranthine. Amaranthine is ravishingly pretty in the sense that smelling it leads to thinking some kind of ravishing is going on among its fruit trees, tropical flowers, and milk baths. Unlike many cumin-inflected fragrances, Amaranthine's dirtiness fades out after a number of hours leaving the scent of sweet, woody, cream on the skin.

Cumin-o-meter rating 5: Amouage Jubilation 25. This stuff should come with a warning label: For "special" company only. People may disagree, but to me Jubilation 25's collision of cumin with hothouse flowers and lemony-wood creates a fragrance that is as close to sex in a bottle as you can get, especially if the fooling around involves Taittinger and a Bentley.

Cumin-o-meter rating 7: Rochas Femme. Take Jubilation 25, cheapen it a tad, crush in some peaches and a little more cumin, and you have Femme. Jubilation 25's maid is wearing Femme on her nights off and gets luckier in a week than her mistress does all month.

Cumin-o-meter rating 10: Alexander McQueen Kingdom. Call out the sirens! Kingdom is cumin ahoy. If you are put off by cumin, don't even let a vial of this sweet, rosy, spicy goodness in your house. It's too cuminy for me to wear, but I like having a little around to smell from time to time.

Which fragrances with cumin have I forgotten? Where would they rate on the cumin-o-meter?

Note: image is Regular Cumin [cropped] by FotoosVanRobin at flickr; some rights reserved.