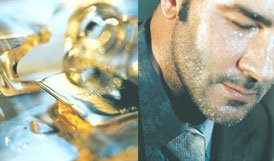 Tom Ford will launch his debut fragrance for men this fall. Tom Ford For Men features...

...cypriol, a root from India said to be used in fragrance for the first time with this project. Ford says it gives his new scent "that slightly dirty, sensual, sexy smell."

"It's not the same as natural musk used to be, but it has a bit of something that some people would think slightly dirty," Ford said. "I think it's warm and sensual."

Update: see a review of Tom Ford for Men.