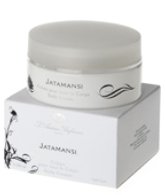 With its new Jatamansi line, L’Artisan Parfumeur moves beyond fragrance (and the occasional matching scented lotion) into the realm of natural skincare. Following the fashion set years ago by companies such as Aesop and Jurlique and more recently updated by the bohemian-chic Jo Wood Organics, L’Artisan has blended organic, plant-derived ingredients into luxurious formulations for the body. The Jatamansi Bath Milk, Body Oil, and Body Cream are packaged in white containers with stylized black botanical elements, and they also continue L’Artisan’s interest in faraway destinations and exotic scents.

The central motif for this line is spikenard, called “jatamansi” in Sanskrit, a flowering plant that grows at high altitudes in the Himalayan mountains. Spikenard is a member of the valerian family of flowering plants, and the essential oil obtained from its rhizome has long been valued for its aromatherapeutic benefits. It has been used for centuries as an ingredient in temple incense; in traditional Indian medicine, it is administered for mental calm and sound sleep. It also appears in the Bible: it is mentioned several times in the Song of Solomon, and it is named as the costly ointment with which Mary Magdalene anointed the feet of Jesus.

In L’Artisan’s Jatamansi line, spikenard oil joins other certified organic ingredients in formulations created to be as pure and yet as sensuous as possible. The scent of these products is lightly woody and pleasantly sharp; it reminds me of both the peppery core of Poivre Piquant and the cedary note of Dzongkha, and if you enjoy either of those fragrances, the Jatamansi bodycare will probably appeal to your nose. The Body Cream’s fragrance was noticeable as I applied it, but it faded within a half hour. Judging by L’Artisan’s descriptions of the Jatamansi line, however, the fragrance is secondary to the organic certification and dermatological benefits of the products. The cream does have a truly lavish texture due to its combination of shea butter, apricot seed oil, rose hip oil, and jojoba oil, and it absorbs quickly, leaving a velvety feel on the skin.

My lone reservation about the Jatamansi Body Cream is its cost: it is priced at $125 for a not-so-large, screw-top jar. While I generally believe that a $10 lotion will have higher-quality ingredients than a $2 lotion, and I can often be swayed by the more unusual fragrances or elegant packaging offered by a $20 product, after a certain point I become alternately anxious and skeptical about pricing. I think there’s an economic theory about “diminishing returns,” and if I were more of an economist, I could apply it to toiletries. Instead, I’ll probably just keep buying my favorite Avalon Organic Botanicals Ylang Ylang Body Lotion (12 oz. for about $8) and Lush Dream Cream (8 oz. for $20).

I did enjoy trying the Jatamansi Body Cream, and I wouldn’t want to deter anyone else from buying it. However, I’d rather put that money towards a bottle of perfume, perhaps even the forthcoming Jatamansi Eau de Toilette. I had a chance to sniff this fragrance, which will be released in May, on the arm of a gracious L’Artisan sales assistant. It gave me the impression of a lemon slice sitting on a sun-warmed wooden tabletop: bright and smooth, and appropriate for either gender and any season. I hope that it will smell just as good on my own skin.

Jatamansi Body Cream is $125 for 6.8 fl. oz. For buying information, see the listing for L’Artisan Parfumeur under Perfume Houses.