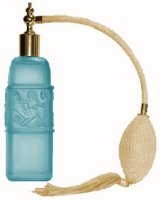 One more day of comfort fragrances, then we're moving on; anyway, this is less a review than a brief news flash, and it is old news at that: Molinard Iles d'Or, as has been pointed out on several of the fragrance forums, is virtually identical to Molinard Tendre Friandise. Or at least, the version of Iles d'Or in the newish Molinard 1849 collection is; I haven't tried any of the older versions. If I had to guess, I'd say that it probably isn't the same stuff as the original Iles d'Or, which was released in the 1930s. This does not smell like a classic 1930s perfume. It smells like a modern candied fruity floral, and is one of very few such scents that I really like.

The Molinard 1849 Collection features seven of Molinard's best known perfumes in reproductions of a Lalique-designed bottle. Iles d'Or (shown) is in Eau de Parfum, and 100 ml is $185.

If you're on a budget, it is probably still cheaper to just have Tendre Friandise shipped from Molinard in France (it is not currently distributed in the United States). Molinard is running a special at the moment: 50 ml of Eau de Parfum plus body lotion and shower gel for 42€. If you're not on a budget, the 1849 Collection bottles are gorgeous.

For buying information, see the listing for Molinard under Perfume Houses.

Also from the 1849 Collection: Molinard Habanita.