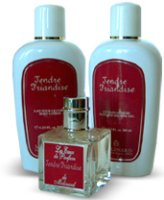 Molinard is an old Grasse perfumery established in 1849, and still family-owned. Their best known fragrance is probably Habanita, which was introduced in the early 1920s. Tendre Friandise (Sweet Candies) was released in 2003; the notes are freesia, pear, lime, mirabelle plum, jasmine, sandalwood, amber, cedar, nougat, praline, white musk and vanilla.

For the most part, I prefer my fragrances dry rather than sweet. The phrase "overly sweet" appears frequently in my own testing notes, and usually means that the fragrance was dismissed. But every so often I want a dose of candy, and when I do, I reach for this favorite from Molinard.

Tendre Friandise starts with candied fruits, mostly pear, and I have to say that the start is rather perfume-y. It dries down to a creamy vanilla candy with light florals and lots of nougat and praline. There are quiet woody undertones and a very clean musk, and that is pretty much the whole story. It is sweet, but also soft once it calms, so I never find it overwhelming. What elevates it over some of the candy perfume competition is a bit of a spicy-peppery bite, perhaps from the freesia, which gives it a more sophisticated feel than say, Aquolina Pink Sugar.

It is probably not a "great" fragrance by any objective standards. It will not inspire awe and wonder, and it will not make perfume history. But I would make the same claim for it that I would make for many others in my collection: for what it is, it is perfect. And sometimes you need a little candy.

Tendre Friandise is an Eau de Parfum, and the lasting power is very good. I emailed Molinard earlier this year to verify that it was not scheduled to be discontinued, and they assured me that it was not, but it certainly is getting harder to find in the United States. It is currently available in a 50 ml bottle at hamptonct or perfumebay.

Update 4/07: Tendre Friandise has pretty much disappeared from the United States; see Molinard Iles d'Or, or order it directly from Molinard in France.