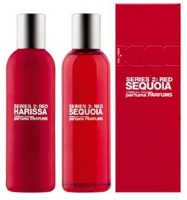 Red was the second series of fragrances launched by Comme des Garçons, following the now sadly discontinued Leaves series. It debuted in 2001 with 5 fragrances, all revolving around the theme, obviously, of things that are or might be red. The series includes Harissa, Sequoia, Palisander, Carnation and Rose. Harissa and Sequoia are both by perfumer Bertrand Duchaufour (who also created Monday's Dzongkha and Tuesday's Méchant Loup) and those are the two under consideration today.

Harissa is named for the North African spice mixture; other fragrance notes include blood orange, red chili pepper, angelica, saffron, nutmeg, cardamon and tomato. The top notes are muy fabuloso: basically lots of orange and lots of hot pepper. As it dries down, other spice notes join in, and while cinnamon is not listed and there probably isn't any, after 15 minutes or so it reminds me very much of Red Hots melting in fresh orange juice.

After that, the tomato intensifies and the orange begins a slow fade. It smells like a Bloody Mary for a bit, then the saffron and angelica heat up and it takes off on a more vegetal sort of path.

Harissa is an interesting scent, and if it would just retain all the fiery heat of the top notes, I would adore it beyond measure. But as these things go, the spices soften and it is just a little less fabuloso to me then. It is one of those fragrances that I keep reapplying to get the rush from the first blast. Harissa comes in a candle and that might be the perfect way to have your cake and eat it too — do comment if you've tried it.

Sequoia has notes of California redwood, red rum, opopanax, karo karounde, agarwood and mahogany. Fans of L'Artisan Timbuktu will recognize the karo karounde, and in fact, Sequoia smells something like an early sketch done in preparation for Timbuktu. That is not to imply that Sequoia smells unfinished. It is beautifully done but the focus is more precise, and it is hardly worth trying unless you are a huge fan of wood: you can pick out other notes and it has a nice resinous undertone, but the basic impression is of a huge, newly cut hunk of wood, still oozing sap. If you do love wood, it is glorious stuff, and for that matter, I'd like to have the Sequoia candle too.

Comme des Garçons Harissa and Sequoia both come in 100 ml bottles of Eau de Toilette (the older 75 ml bottles are now discontinued), and both have good lasting power. For buying information, see the listing for Comme des Garçons under Perfume Houses.

Update: false alarm, the Leaves series was not discontinued!