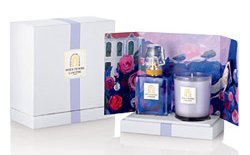 In late 1999, Lancome launched 2000 et Une Rose to celebrate the turn of the century. The fragrance was developed by perfumer Christine Nagel, and included notes of rose, amber, vanilla and musk. 2000 Et Une Rose was a limited edition, but you could still buy it at the Lancome Institute in Paris even after it was discontinued in its original teardrop-shaped bottle; still, fans in the United States could no longer pop down to their local Lancome counter to replenish their supply. Happily, last year Lancome reissued the fragrance as part of its "La Collection" series under the new name Mille et Une Roses.

Mille et Une Roses is a beautiful fragrance, and one of my favorite roses. It is not the straight up, dewy-fresh rose of Serge Lutens Sa Majesté la Rose, but nor is it a sexy, big-statement rose, as in, say, Annick Goutal Ce Soir ou Jamais or Frederic Malle Une Rose. Mille et Une Roses lies somewhere in between; it is a quiet fragrance, warmed by the amber and musk but not overpowered (it is not a dark scent by any means), and it feels relatively unembellished.

Like Stella McCartney's Stella, Mille et Une Roses has an modern, unfussy quality; it is the sort of fragrance that might convert even a hardened rose-hater. Still, Mille et Une Roses does not have the resolutely casual feel of Stella. It is a deeper scent, with a drier, woodier base, and only a very light touch of vanilla. It is romantic without being old-fashioned, and very much worth trying.

I cannot restrain myself from carping about the presentation. The boxy La Collection bottles are fine, but there is something about the very blue juice in the very squared-off bottle that just reminds me of nail polish remover, and that doesn't fit in with the Mille et Une Roses fragrance at all. End of rant.

Mille et Une Roses is an Eau de Parfum, and the lasting power is perhaps a bit below average. A 50 ml bottle is $125. The gift set (shown above, and according to the Lancome website, nearly out of stock) is $150 and also comes with a candle.