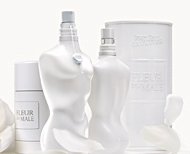 The fragrance was created by Francis Kurkdjian, the author of Gaultier's 1995 debut Le Male, and features the notes of white flowers in an intensely floral jus that is for the man 'who has nothing to hide', according to the company.

Like Gaultier's previous scents for both men and women, Fleur du Male comes in a torso shaped bottle this time interpreted in pure white. (via cosmeticsint)

Update: according to Women's Wear Daily, Fleur du Male is a fougère, and Kurkdjian "overdosed the orange blossom", and used a "'revisited fern accord, with notes of petigrain leaf and coumarin."