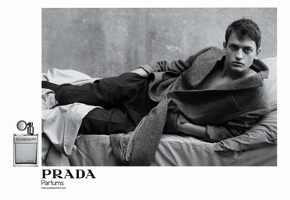 Prada Amber Pour Homme is the latest fragrance release, and the first for men, from the house of Prada. It was developed by perfumer Daniela Andrier, and centers on four accords: an amber accord, as in the original Prada Eau de Parfum for women, a fougère accord, a fresh cologne accord, and a suede accord. The notes include bergamot, mandarin, neroli, cardamom, geranium, vetiver, orange blossom, myrrh, nirvanolide musk, labdanum, sandalwood, tonka bean, vanilla, saffron, patchouli and leather.

Prada Amber Pour Homme is not at all what I expected, being less obviously based on the amber of the women's Eau de Parfum than I had imagined it would be. It is actually pretty well described by the ad copy: it smells like the four accords listed above, with the citrus/fresh cologne strongest in the top notes, and the suede most evident in the dry down, although even then, it is a very soft suede. The amber is there but likewise subtle, the fougère accord is very mild (if there is lavender here, it is very much under control), and there are hints of warm earth and pale woods. It is sweeter than the women's versions, but I wouldn't go so far as to call it sweet.

The four accords are tied together by soft but persistent soapy undertones — what Amber Pour Homme smells like as much as anything is a very expensive, very creamy men's soap, a soap that your average person (e.g., me) couldn't afford and wouldn't know where to buy anyway. In that sense, it reminds me very much of Hermès Caleche, and as with Caleche, I would describe Amber Pour Homme as elegant and sophisticated in a very quiet way, without hitting anyone over the head about it.

Amber Pour Homme is being advertised as sensual — what fragrance isn't? — and perhaps it is, but it has a rather conversative, even sober quality about it. I would call it soothing more than sexy, and the man that I picture wearing it bears no relationship to the boy in the ad: he is older, more dignified, and better (more?) dressed.

It is certainly an overtly masculine scent, but it is mellow enough that it will be easily borrowed by those women who don't mind buying on the other side of the aisle. If you would wear Guerlain Vetiver or Christian Dior Eau Sauvage, you won't have a problem wearing Prada Homme. It is easily my favorite of the Prada releases so far, and I'll be waiting impatiently for it to show up at the online fragrance discounters.

Miuccia Prada, the Italian designer who built her grandfather's leather goods company into a modern luxury conglomerate, was apparently very much involved in the development of Amber Pour Homme:

"I felt like a nose, it was the best job, I had fun creating the fragrance," said Prada...

"I just tried to imagine what I would like if I were a man. You know people ask me if there is a muse, an inspiration, a thought driving my ideas, but I just know what I like," said Prada.

The designer said she had always been fascinated with fragrance and that part of the reason for creating a perfume portfolio for the brand stemmed from the fact that she could no longer find something she liked to wear. (via Women's Wear Daily, 6/30/2006)

Of course, rare indeed is the designer (or celebrity) who admits that they left the creation of their latest fragrance release up to a marketing committee, but for some reason this statement rings true to me, at least for Prada Eau de Parfum and Prada Amber Pour Homme. Both fragrances smell like they were created to please the tastes of an individual rather than to sell to millions, or to make any bold statements about the brand behind them.

Prada Amber Pour Homme is available now at Neiman Marcus, where they are calling it Prada Man. The line will include 50 and 100 ml bottles of Eau de Toilette, a deluxe 100 ml bottle with atomizer, and eventually After Shave Balm, After Shave Lotion, Bath & Shower Gel and Deodorant Spray.