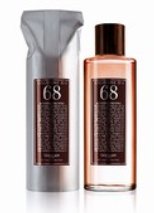 Guerlain has launched Cologne du 68, named for the address of their flagship store on the Champs Elysées in Paris. The fragrance was created by nose Sophie Labbé, and includes green tangerine, lemon petit-grain, limette, star anise, coriandre, cardamom, pepper, immortelle, opoponax, and cedar. The fragrance is exclusive to the flagship store and is 180€ for 490 ml. According to Bois de Jasmin, there was a 2002 Guerlain fragrance of the same name by nose Mathilde Laurent; whether this is an entirely new fragrance or a reworking of the older scent, I cannot say. Update: see a review of Guerlain Cologne du 68.

Hermès will launch Elixir des Merveilles in September. The fragrance was created by nose Jean Claude Ellena and features notes of candied orange peel, vanilla biscuit (tonka bean), sandalwood, incense and ambergris. (both above via parisjoyce)