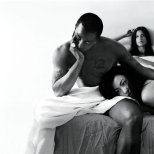 The original ad for the Sean John Unforgivable fragrance (see right), which shows the star in bed with two women, was apparently deemed too controversial for many department stores, and will be replaced. The ad will remain on billboards and in magazines. (via prnewswire) Update: see a review of Sean John Unforgivable.

And apologies for yet another day with no perfume review...have just had my internet access restored after a 32 hour outage. Hope to catch up tomorrow.