As previously reported, Mariah Carey will be joining the celebrity fragrance game this year. Her debut scent will be called M by Mariah Carey (another letter fragrance!) and will launch this fall:

The M by Mariah Carey scent, which the singer created with perfumer Carlos Benaim of International Flavors & Fragrances, is a floriental. It has top notes of marshmallow and sea breeze accord, a heart of Living Tahitian Tiare and gardenia and a drydown of sheer amber, patchouli and Moroccan incense.

Update: the description of M by Mariah Carey from Elizabeth Arden:

A warm and inviting marshmallow is woven throughout the fragrance, evoking a sense of comfort. This indulgent accord captures Mariah's fondest childhood memories of being in the kitchen with her father.

The lush floral heart of the fragrance combines a feminine veil of Living Tahitian Tiare flower wrapped in the aura of wet Gardenia petals. This beautiful blend is reminiscent of the fragrant breezes of Hawaii and the Isle of Capri, Mariah's favorite getaway.

The soul of the fragrance reveals a sexier dimension. Sheer amber, infused with spicy, woody accents of Moroccan incense forms a seductive accord that embodies Mariah's sensuality, beauty and glamour. 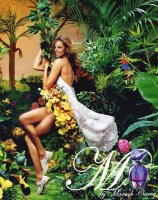 Update: the ad shown at right is an internet prank:

...an Arden spokesman says, "An image of MC with her fragrance bottle photoshopped in the corner is being featured on several blogs today, and is categorically not the advertisement for her new fragrance, nor is it even remotely close. The real ad for M by Mariah Carey will debut exclusively on TMZ during the second week of August." (via contactmusic)

Update: see a review of M by Mariah Carey.