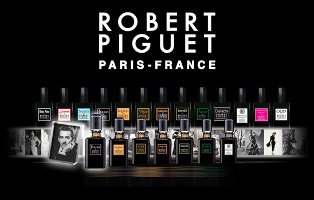 Swiss fashion designer who launched his couture house in Paris in 1933. Robert Piguet had worked under Redfern and Poiret; in turn, he provided training or support for a number of younger designers including Balmain, Hubert de Givenchy and Christian Dior.

The house closed in 1951, and Piguet passed away in 1953. The ownership of the fragrance business has since changed hands several times, and is currently owned by Fashion Fragrances & Cosmetics. The house has reissued a number of the brand's older fragrances, and starting in 2011, a series of new compositions.

At selected department stores (Barneys, Bergdorf Goodman, Neiman Marcus, Nordstrom in the US; Harrods, Harvey Nichols and Selfridges in the UK).

Also try Parfums Raffy in the US or The Perfume Shoppe in Canada, or buy directly from the Piguet website.

See all posts on Now Smell This tagged Robert Piguet.