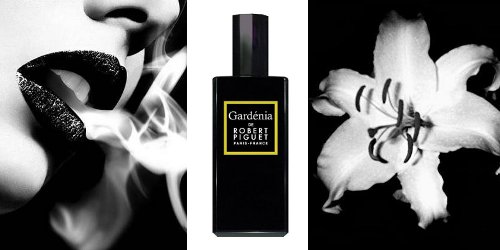 I have not been a huge fan of the modern Robert Piguet line. I haven't tried even close to all of them, and perhaps I've skipped over the best, but those few I've tested (Douglas Hannant de Robert Piguet, Mademoiselle Piguet, Petit Fracas)1 have not bowled me over. For that matter, I'll come clean and admit that much of the resurrected classic line (Baghari, Visa & Cravache, etc.) doesn't really bowl me over either. I'm a Fracas girl, with a secondary respect and admiration for Bandit, and while I admire the care they've taken in keeping the Piguet brand alive and relevant, I'm pretty happy sticking with those two.

The newish Gardénia de Robert Piguet, though, is really pretty. I wasn't quite bowled over, but I was impressed, and I'm sorry to have to give away the bottle I was sent for review (it's already taken, sorry). Like most (all?) of the modern Piguet line, it was developed by perfumer Aurelien Guichard, and the composition walks a very fine line between what a hardcore perfumista might accept as a "gardenia" and what a modern consumer might be willing to wear to work.

The opening (the best part, and I kept re-applying to smell it again) lives up to its PR billing: "The raw scent of gardenia essence ebbs with nuances of lily and ylang ylang for a hypnotic beginning." Yep, it's heavily floral right out of the gate, and you'll notice all three floral notes mingling with some bright citrus. The gardenia, to me, is clean, but my tolerance for indoles is high so I'll wait to hear what others say on the matter. On skin, it only wears like a full-bodied white floral for a short time, which of course will either please you or it won't. As the top notes fade, it's much softer and milder, with dewy florals, still gardenia-ish but not so overtly so as in the opening, and plenty of vanilla, although not so much as to turn the corner into gourmand.

Farther on, the gardenia mostly fades, as gardenia so often does, and you're left with a musky-ambery woods with perhaps a hint of petals. There is supposed to be black leather, and while I don't think anyone will peg Gardénia as a leather scent, it does hover faintly under the ever-so-slightly powdery finish, and darkens things up a bit. Without it, Gardénia would be a woody vanilla comfort scent as much as anything else.

Verdict: Gardénia is pretty but it's no Fracas, and in the end, I (vastly) prefer Fracas. Thank you, Robert Piguet Parfums, for keeping Fracas in production, and thank you for keeping the elegant black packaging. But Fracas, let's face it, is hardly a modern fragrance. If you're after a pretty white floral, something not too heavy but not too watery, and Douglas Hannant and Petit Fracas were too modern for you, or maybe you like the idea of white florals but tend to find the real thing a bit much? Then Gardénia might be the sort of middle ground you're looking for. Worth a shot, anyway.

Gardénia de Robert Piguet is available in 100 ml Eau de Parfum, $175. For buying information, see the listing for Robert Piguet under Perfume Houses (although as of this writing, I don't think it's widely distributed yet...your best bet in the US is Neiman Marcus; in the UK, it's at Harrods).

Coming up: a review of Tauer Sotto La Luna Gardenia, hopefully on Thursday but maybe not until next Tuesday

1. I'm pretty sure I've tried more than those three, but only quickly, on blotters, at Neiman Marcus. Do comment if you have a favorite that you think I should have given more attention.