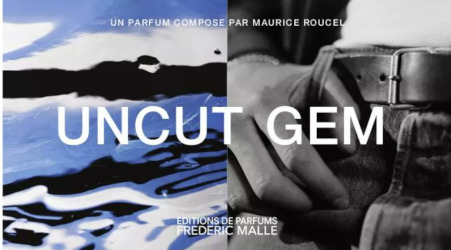 “It’s the kind of man which we never had — more rugged, more extreme, more manly,” Malle said of the scent, which goes against the grain of men’s fragrances today and tends to skew toward the feminine.

“We always begin from the scent itself. We never have a marketing idea,” he continued.

Malle had long adored how Roucel smelled — of something he had created for himself. It took a lot of coaxing, but ultimately Roucel agreed to use that juice as a base and extend it with more complexity and richness for Malle.

There was something not only cool, technically – especially that mad overdose of ambrocenide – but completely irresistible,” says Malle. “With a lot of fresh naturals, and musk, it was not only magnetic, but chic.” Clear spicy top notes of ginger, bergamot, mandarin, angelica root and nutmeg lead you to the fire within: a leathery accord, vetiver, frankincense, generous amounts of amber, and a musk that vibrates with the skin. A muscular corollary, in a sense, to the classic Musc Ravageur.

The result is both straightforward and enigmatic: raw sex appeal gives way to a lingering subtlety. The result somehow renders the smell of skin deeper, warmer, cleaner. Uncut Gem is a study in contrasts. It’s rugged and sensitive, classic and fresh, first impression and haunting echo.

Frédéric Malle Uncut Gem will debut in September. I will update with sizes when I can.