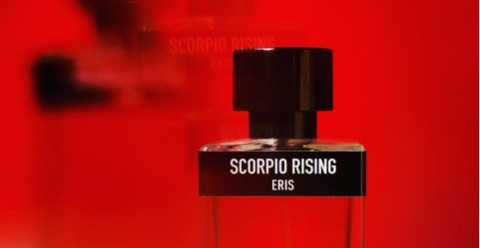 Years and years ago, when I was just beginning graduate school, I made a new friend who had an amateur interest in astrology. At the time, this interest was regarded with suspicion (or even scorn) by the more "serious" members of our academic program. I've always been curious about the storytelling and symbolism of the zodiac, though, so I was a willing ear for her theories about certain classmates' behavior.

"We have too many Leos in this group," she'd murmur to me when the same few individuals kept dominating a seminar meeting. Or, more ominously, "Watch out for the sting of the Scorpio" — in reference to some November-born classmates whom she didn't trust. That latter warning came back to me when I received a sample vial of Scorpio Rising, a new fragrance from Eris Parfums — "a dangerous, spellbinding beauty that will envelop you in its glowing, magnetic sensuality."

However, despite its leather note, Scorpio Rising doesn't evoke the soiled biker jackets worn by the characters in Anger's film. Instead, if it were a piece of clothing, it would be a designer update on the classic motorcycle jacket, slimmed down and impeccably finished. Its spice layer is warm but not food-y (or reminiscent of Red Hots) — its pepper and cardamom notes make my nose tingle a bit, in a good way. Just enough of a "sting"! Its woody layer is a perfect complement, offering a slightly roughed-up sandalwood note wrapped in some aromatic incense; again, almost pungent, but not obnoxiously so. By its dry down, Scorpio Rising turns out to be a spicy leather perfume that I can actually wear, and thanks to its tenacity, I can enjoy it for hours and hours on my skin. And, as compelling as it is, this fragrance doesn't have to shout. It just pulls you closer, which is very Scorpio, after all.

But what if I'm not feeling particularly alluring or ambitious, just not Scorpio-like at all, on any given day? (Most days, that is.) What if I'm retreating back into the shell that is my Cancer birthright and I just want to daydream a little bit? At those times I'll be reaching for my new bottle of Belle de Jour, launched in 2016 as part of Eris's “La Belle et la Bête" collection. Angela reviewed Belle de Jour when it was released, and she compared it to "a gaseous halo of snuffed candles and cobwebs...the back of a linen press that hasn’t been opened in decades." Antoine Lie describes it as "a study in contrasts: a very luminous floral that is salty, sexy and dirty.”

I agree with both of them. Belle de Jour's white florals are creamy and even a little bit vanillic, but they're complicated by a quirky, slightly wood-y and seaweed-y marine note (ambergris, perhaps?) that floats amongst and around them. Belle de Jour's indolic qualities are a lot sneakier than I expected, and that makes me like it more. This fragrance also shares a name with a famous movie, and its mix of elegance and weirdness, something serene and something risqué, feels totally right for that connection. 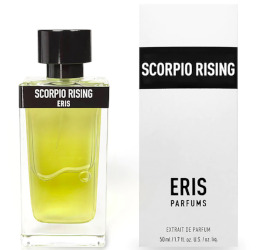 Have you tried Scorpio Rising, or do you have another favorite from Eris that feels very "you"? And hey, what's your sign? Do feel free to share in the comments!