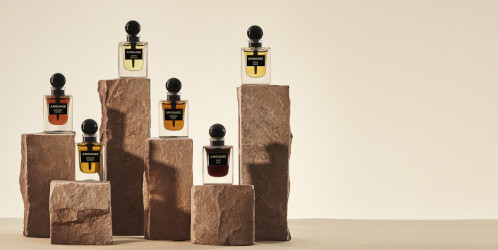 An homage to the beauty, nobility and wealth of the empires that gave perfume its first golden age, Amouage has released an ensemble of six Attars that reunite two schools of fragrance, the technical with the olfactive, to give birth to a new generation of perfume. The sublime and modern pure fragrant oils, from the minds (and noses) of Perfumers Cécile Zarokian, Dominique Ropion and Julien Rasquinet, draw inspiration from the Sultanate of Oman – its rich traditions, rare natural treasures and inherent passion for fine fragrance.

Incense Rori ~ Developed by perfumer Julien Rasquinet. "The sheer glory of Frankincense shines bright against a dark veil of Oakmoss and the hushed warmth of Virginian Cedarwood. The magical scent of Khor Rori at dusk, when incense wafts from the boats ashore."

Orris Wakan ~ Developed by perfumer Julien Rasquinet. "The graceful iridescence of Orris Butter unfolds in a mist of carnal White Musks shimmering with hues of milky Sandalwood. A peaceful ode to the orchards of Wakan, where apricot trees flower every Spring."

Oud Ulya ~ Developed by perfumer Cécile Zarokian. "The raw animality of the Oud Assam is sublimed by the intense smokiness of Birch Tar and tamed by a generous pour of Vanilla. The pure expression of Oud, as royal and lavish as the nature of Ulya."

Rose Aqor ~ Developed by perfumer Cécile Zarokian. "A lush blend of precious Roses blooms amidst a radiant heart of Frankincense and a pearly haze of Sandalwood. A sumptuous tribute to the oasis of Al Aqor, where the rarest roses in the world still grow."

Saffron Hamra ~ Developed by perfumer Cécile Zarokian. "The supreme opulence of Saffron coils around a deeply sensual Rose Centifolia Absolute under leathery fumes of burning Cade wood. The luxurious union of a King and Queen in the stark redness of the Hamra Mountains."

Vanilla Barka ~ Developed by perfumer Dominique Ropion. "A sweet and decadent Vanilla Absolute melts into a voluptuous stream of Tonka Bean lit up by flashes of crystalline Frankincense. An image of the splendour of Barka, the legendary City of Spices near the sea."

Amouage Attars Incense Rori, Orris Wakan, Oud Ulya, Rose Aqor, Saffron Hamra and Vanilla Barka are available in 12 ml; $540 each except for Oud Ulya, which is $590. A discovery set with .7 ml vials is $200. They can be found now at Aedes or Luckyscent in the US, or directly from Amouage.