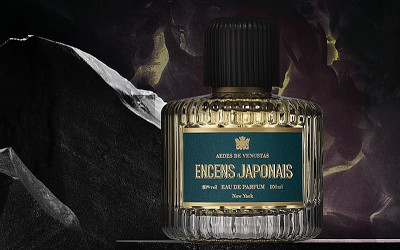 An opulent and spicy perfume draws on the freshness of incense before it is burned.

The doors of a temple swing open. An intoxicating rush of ancient Japanese incense fills the air. It is rich and enveloping, yet it lifts as much as it grounds the spirit. This is the essence of ENCENS JAPONAIS.

A first whiff is a bit like looking through a keyhole: you think you know what you are viewing, but it is only upon further inspection that a full scene emerges. Instantly, a vivacious spiciness is present, a just-ground dusting of bracing pink pepper and black pepper with a touch of orange oil. But quickly other notes come to the fore: the Japanese incense entwined with the softness of leather. The balancing qualities of soft iris and rose. The sensuality of musk, the honeyed bitterness of strawflowers, and the voluptuous sweetness of precious woods draw you further into the depths of the temple.

While incense is immediately associated with depth and smoke, ENCENS JAPONAIS is a little-smelled riff on unburned incense. A freshly opened box, often smelled at AEDES PERFUMERY, has a peppery, fresh quality that dissipates when lit. The most high quality version comes from Japan.

* Note also that Encens Japonais sounds similar, but not necessarily identical, to the discontinued L'Artisan Parfumeur Aedes de Venustas, which was also developed by Bertrand Duchaufour.