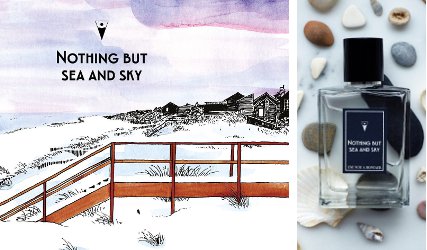 As I'm writing this review, it's the day after Election Day in the United States.* We don't discuss politics here at Now Smell This, so I'll just say that it's been a stressful week (and month and year) so far. The current suspense is making me wish I were somewhere other than here, somewhere other than now, although I'm not usually much of traveler.

Come to think of it, I first expressed my non-wanderlust in a review of two fragrances from Une Nuit Nomade, Rose America and Memory Motel. The description for Nothing But Sea and Sky, the latest in Une Nuit Nomade's tribute to the beaches of New York's Montauk, caught my eye. This is described as "a reassuring fragrance" evoking the seashore in winter, "a tribute to Montauk under its coat of snow." Its name comes from a poem by Walt Whitman:

"I stand as on some mighty eagle's beak,
Eastward the sea absorbing, viewing, (nothing but sea and sky,)
The tossing waves, the foam, the ships in the distance,
The wild unrest, the snowy, curling caps—that inbound urge
and urge of waves,
Seeking the shores forever."  ("From Montauk Point")

I like beaches most in the off-season, so this fragrance's concept, filtered through Whitman's verse, appeals strongly to me. Nothing But Sea and Sky's composition of bergamot, sandalwood and white musks actually does feel like a summer seaside outing recalled in chillier days.

It starts with a juicy spark of bergamot and swiftly transforms into something that reminds me of suntan lotion — the official notes don't include ylang ylang or neroli (slightly dirtied-up, no less), but I get a Coppertone flashback all the same. Then the menthol-and-tropical-flower suntan lotion effect gradually fades away, leaving just its musky part to mingle with some cool, lactonic sandalwood. This is the "snowy" phase, apparently. Overall, Nothing But Sea And Sky isn't groundbreaking but it's likeable and satisfying in a way that's, yes, reassuring. 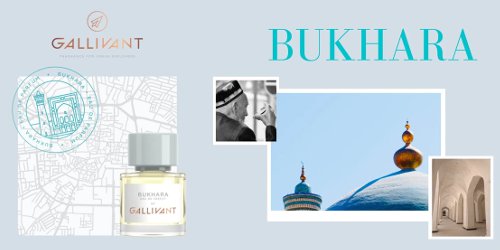 For some olfactory travel that takes me much further away, I've been trying Bukhara, Gallivant's ninth fragrance. This one is named for an ancient city in Uzbekistan, a key location on the historical Silk Road trade route between Europe and Asia, a source of the spices that were used as flavorings, as dyes and — yes — as ingredients in perfumery. As Gallivant describes this site's sensory impressions:

A chalk-pale city, clay and brick houses whitewashed to guard against the sun. A thousand  shrines, and turquoise tiles. Old Soviet books being sold alongside silks and spices and the  traditional karakul fur (think Astrakhan hats and coats). Private patios, vines overhead. Mulberry trees. The pleasures of the table---apricots, pears, and the local specialty — called  ‘shurdanak’ — roasted and salted apricot seeds.

Gallivant's Bukhara was developed by perfumer Ralf Schwieger and its composition includes notes of caraway, pear, coriander, ambrette, orris (iris), osmanthus, jasmine, apricot, clove, benzoin, saffron, amber and musk. On my skin, Bukhara opens with the iris, and it's a root-y iris grounded in cool, dusty soil, rather than a powdery iris or a green iris or any other variations on this theme. Then there's a leather accord, but it's still very sophisticated, not raw or oily. About two hours after I've applied Bukhara, its dry down is a gentle blend of peach-skin and ambrette (with the faintest whisper of clove) that clings to my arms for several more hours.

Bukhara is more reserved than I expected, for a fragrance that's described as "woody, spicy, and earthy" — it's like a watercolor of a faraway city rather than a color photograph. It's also less "assertive" and conventionally "masculine" (Robin's words) than Aedes de Venustas Iris Nazarena (another Schwieger creation) and more substantial and sophisticated than Atelier Cologne Iris Rebelle. I like it very much and I'll be finishing off my sample vial soon...maybe before we know the final results of the current presidential election, maybe after; either way, it allows me some brief imaginary wandering across time and place, which is something many of us probably could use right now.

*Ed. note: and it is my fault this is posting so much later!