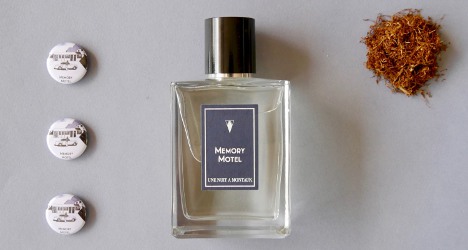 I'm not an avid traveler. Motion sickness, fear of terrorism, a simple but strong attachment to my own bedroom (husband and cat included) — all things considered, I'd rather stay home. But I can always journey through scent, right? Well, there are so, so many niche perfume lines named after geographical locations these days. Every time I see a new one, I recall a line from the film version of "Hedwig and the Angry Inch," in which the main character remembers her young lover's musical tastes: "He played me songs. The bands were new to me: Boston, Kansas, America, Europe, Asia. Travel exhausts me."

For example: fragrance line Une Nuit à Bali recently rebranded as Une Nuit Nomade, promising a wider itinerary of global travels. They've followed their Bali-themed scents, oddly enough, with Une Nuit à Montauk, an olfactory homage to Montauk, New York. The mention of Montauk piqued my interest enough for me to order samples, because Montauk reminds me of 1) the movie "Eternal Sunshine of the Spotless Mind" and 2) a long-ago weekend trip with the above-mentioned husband. (If Une Nuit Nomade had named this collection Une Nuit à Nantucket or Une Nuit à Santa Monica, on the other hand, I probably would have kept scrolling, exhausted.)

This new collection includes two fragrances, Memory Motel and Rose America, developed by perfumer Annick Menardo. Both make specific references to the sights and smells of this beach town at the very far end of Long Island. Memory Motel refers to the Rolling Stones, who reportedly composed their song "Memory Motel" in 1975 while staying at Andy Warhol's rambling Montauk estate. (You can view a photo of the original Memory Motel in Montauk here.)

Memory Motel has notes of bergamot, iris, incense, carnation, moss, patchouli, vanilla, tobacco and leather and is described as an androgynous scent and a "burning tribute to those restless, turbulent times." It's not as Stones-like as I might have expected — not nearly enough leather jacket, sweat, or booze — but I found it a pleasant detour from my usual florals. It's a linear and long-lasting incense fragrance with a sweet undercurrent. There's something that reminds me of benzoin, paired with the vanilla. The tobacco is more "pipe" than "cigarette," if that makes sense, and the subtle florals keep it from veering into traditionally "masculine" territory. I have a feeling that Memory Motel isn't complex or dirty enough to thrill my incense-loving colleague Kevin here at Now Smell This, but I've found it wearable yet intriguing enough to enjoy all day. 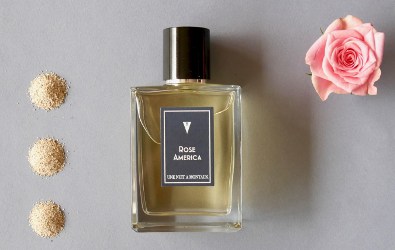 Naturally, since I'm a rose-lover, I've also tried Rose America. This fragrance, with notes of raspberry, sea spray, rose, carnation, heliotrope and ambrette seed, is an ode to the beach roses (rosa rugosa) that grow along the dunes of Montauk. I admired those roses when I visited the Montauk shore all those years ago, so I was looking forward to trying Rose America. It didn't disappoint, although it wasn't quite what I expected, either. It doesn't have the sea-air feeling of Lostmarc'h Iroaz, the salty amber of Les Parfums de Rosine Ecume de Rose or the grassy edge of Dawn Spencer Hurwitz's Beach Roses. It starts off with something that I can't quite identify, a ripe green-berry opening that reminds me a bit of juniper. Then there's a quick wave of starchy aldehydes (meant to evoke "the clean smell of fresh sheets" in a rented summer house) and then a warm, peppery carnation heart.

Actually, Rose America doesn't really feel like a rose perfume until it's been on my skin for an hour or two, when a soft rosewater note surfaces and gradually takes over from the carnation. The rose-y dry down lasts pretty well, boosted by the heliotrope and just a hint of berry. Rose America doesn't cling to my skin as long as Memory Motel does, but it still puts in a decent performance for a dreamy floral scent. And even though Rose America's transitions are slightly odd, its unusual development kept me interested. I'd consider buying a small bottle of this one at some point.

Overall, I'm glad I took this perfumed trip...and maybe even curious enough to backtrack and try Une Nuit Nomade's earlier Bali fragrances. (Have you tried them already? If so, feel free to share your impressions!) Wishing you safe travels, everyone, wherever you're headed this summer.