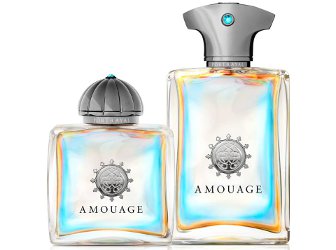 PORTRAYAL is a manifestation of a person’s orientation to him or herself. A reflection of his or her unique authenticity, it is about breaking free from the cages of solitude society sets around people because their truths are often seen as shockingly unconventional.

Portrayal Woman ~  "At the heart of Portrayal Woman is a smoky yet sweet mélange created by the fusion of Craven ‘A’ Tobacco with a dusting of Vanilla. Brought together with Jasmine at its top and Elemis at its base, it recreates 1920s liberation. The floral fragrance is for the poised and playfully refined woman who dares to defy. It is heartened with an undertone of the sensuality of Tuberose that together radiates a sultry trail of seductive sillage."

Portrayal Man ~ "Portrayal Man is an olfactive depiction of 1920s bohemian culture. Its woody and leather aroma exudes an air of exquisite audacity. It is about the arrogance and social tension in the world’s cultural discourse. With Vetiver at its heart and top notes of Violet Leaves, Portrayal Man emits a dandy yet masculine impression. Its light spicy facet enriches its woody base of Cade, allowing the fragrance to illustrate an enlightening energy that is unforgettable."

(quotes via Amouage at Facebook, additional information via amouage)