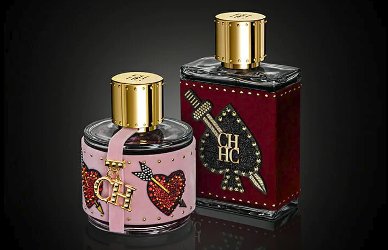 CH Queens ~ "Love is the closest thing to magic. A high-stake game of enchantment and seduction; CH QUEENS will make you the heart of the game with a new romantic women’s fragrance. The Leather flacon once seen for CH WOMEN has been modernized in a playfully pink velvet hue, with textured collage artworks and a studded CH charm finishing off the new royal look. The potion itself is enchanting, opening with watery citrus notes of pink grapefruit and neroli before transforming into a floral bouquet of ylang ylang and peony. The final trick is revealed in a woody oriental base, where sandalwood and vanilla combine for a magical effect." Additional notes include red seaweed and coconut.

CH Kings ~ "Transform your city into a contemporary playground of love with CH KINGS, a masculine yet playful new limited edition. The very essence of magic, love can be like a card game—play it with CH KINGS. This fragrance for men is presented in a red velvet bottle adorned with the new Royal CH seal; the Ace of Spades. Seducing the Queen is no easy feat. CH KINGS will grab her attention with a contemporary opening of black & pink pepper, cardamom and violet. The real magic comes in the heart, with sweetness of pineapple and herbal clary sage combined with cocoa and coffee, to send her mixed messages. A woody base of tonka bean and musk complete the trick." Additional notes include lavender.