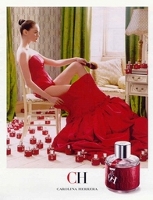 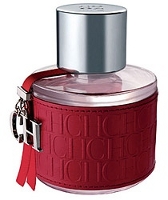 Carolina Herrera will launch their latest fragrance for women, CH, in October:

The fresh, oriental floral fragrance of CH was composed by Olivier Cresp of Firmenich in cooperation with Rosendo Mateu, the Puig house nose, and Carolina Adriana Herrera, the founder’s daughter. It comes in a squat, cylindrical bottle wrapped in red leather featuring the CH logo. A silver CH logo on a red ribbon decorates the bottle’s neck.

Other recent launches from Carolina Herrera: 212 Splash and 212 Men Splash.

Update: Carolina Herrera CH is available in 50 and 100 ml.