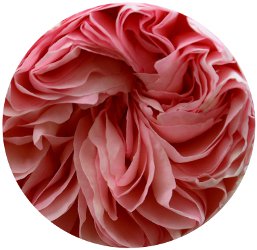 I think many of us have a box or bowl of perfume samples that we've tried once or twice, weren't quite sure about and plan to try again someday — the "purgatory basket," as Robin dubbed it years ago. I can never resist trying rose-inspired fragrances, even ones that I have a sneaking suspicion I might not actually like, so I inevitably end up with more than a few semi-forgotten rose samples rattling around my desk.

Here are brief reviews of four scents I recently plucked from sample limbo and gave another wearing.

Eau d'Italie Rosa Greta was released in spring 2017 and I received a sample in a gift-with-purchase bag about a year later. It was developed by perfumer Fabrice Pellegrin and was reportedly inspired by a romantic villa on the Amalfi coast where Greta Garbo liked to retreat with her lover Leopold Stokowski in the late 1930s. Its notes include lychee, white tea, rose, cedar and Ambrox. When I applied Rosa Greta to my wrist, I thought, aha! — could this be a (relatively) affordable alternative to Maison Francis Kurkdjian À la Rose? It start off as a dewy, softly fruity rose. Unfortunately, this rose ends up cocooned in clean, sheer musk. Nice enough, and very office-appropriate, but I can't imagine Garbo wearing it.

MCMC Fragrances Maine (released in 2010) was also inspired by an amorous holiday, this one on the island of North Haven off the Maine coast. It's a composition of rose absolute, local clary sage, sea air and wild myrrh created by MCMC founder Anne McClain. Maine has a true rose heart with delicate herbal and ozonic notes flickering across it like shadows. I've tested Maine multiple times in the past and I remember the clary sage being more distinct when I first tried it, but my memory could be playing tricks on me. In any case, a simple yet beautiful rose perfume like this is harder to find than you may think.

Next up: Ex Nihilo Rose Hubris, developed by perfumer Olivier Pescheux and released in 2014. It includes notes of lychee, fenugreek, Rose de Mai, labdanum, oakmoss, patchouli and musk. I haven't been impressed by this brand in the past, so when a friend shared a few Ex Nihilo samples from a NYC fragrance boutique, I pushed them aside for the time being. Rose Hubris turns out to be a contemporary rose chypre, sharp and greenish, yet more transparent and easier to wear than Serge Lutens Rose de Nuit or Sisley Soir de Lune. It's an interesting throwback. Strange, for a company that strives to appear "disruptive," but there you go.

My last rose trial for the week was Atelier des Ors Rose Omeyyade, which appeared in an online gift-with-purchase packet last December. Rose Omeyyade's notes include raspberry, rose, pink pepper, patchouli, gaiac, brown sugar, amber, sandalwood, and oud; it was developed for Atelier des Ors by Marie Salamagne and released in 2015. (Its name alludes to the historical caliphate of Umayyade.) Rose Omeyyade starts off with a jammy, red-winey "fruitchouli" rose (reminiscent of Frédéric Malle Portrait of a Lady?) that turns piercing and woody, even somewhat medicinal. That effect may be due to the oud in this composition, which has a distinct Band-Aid-like smell.

So, what made the cut? I ended up purchasing (finally!) a roll-on of MCMC Fragrances Maine for myself. I'm going to use up the Rosa Greta sample (it should be a nice easy option on a warm day) and pass along the other two samples to friends or coworkers. I can't love every rose perfume that crosses my olfactory path, but I feel oddly relieved to have reached a personal verdict for four more of them.