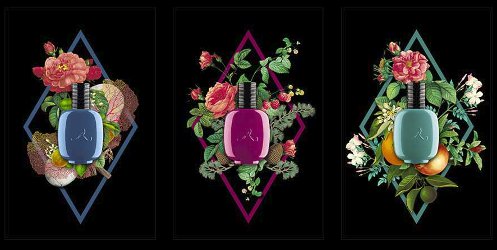 If you read my recent review of Les Parfums de Rosine Vanille Paradoxe and you were curious about the other three fragrances in Rosine's Les Extravagants collection, never fear — here I am with further thoughts about this quartet! Even from a visual standpoint, Les Extravagants are clearly intended to stand apart from the house's original collection. Their jewel-toned bottles have black ribbed caps, with no ornamental tassels, bows or tutus; even their boxes are redesigned, with the original design made bolder and more geometrical, a pattern of dark Art Deco diamonds rather than a delicate trellis in gold on white.

Les Parfums de Rosine has often ventured beyond a traditional interpretation of rose perfume, taking various rose cultivars as inspiration and teasing out their facets of spice, mint, powder, etc., as the case may be. Les Extravagants go further, so that the connection with roses feels less obvious — even tenuous.

Eloge du Vert, for example, was developed for Rosine by perfumer Delphine Lebeau and its notes include rose, green pepper, ginger, pepper, patchouli and cedar. It's reportedly inspired by Rosa x centifolia "muscosa", although it initially smells more like a vegetable garden than a rose garden: tomato leaves, crisp bell peppers, a hint of cilantro, a handful of dirt. Eloge du Vert is packaged in a green bottle (above right), and its heart briefly reminds me of that greenest and freshest of all bar soaps, Irish Spring. However, it dries down like a deeper take on a traditional Eau de Cologne, heavy on the herbal and woody side.

Bleu Abysse, in the blue bottle (above left), was developed by Serge de Oliveira and takes Rosa moschata as its theme, with notes of bergamot, elemi, cassis, rose, mineral accord, oud, patchouli, vetiver, seaweed and incense. It isn't any more rose-y than Eloge du Vert, but it has a weirdness that appeals to me. It starts off with a juicy citrus accord but quickly turns drier and saltier and definitely more seaweed-y, with a distinct iodine note. I'm don't normally wear strongly woody or oud-based fragrances, but Bleu Abysses's base blurs all the oud and wood and root-y notes with just a wisp of some aromatic incense in a way that intrigues me.

And third, we have Bois Fuchsia (above center), built on the theme of Rosa gallica with a composition of blackcurrant, iris, rose, raspberry, lychee, patchouli, musk and sandalwood. It was developed by perfumer Michel Almairac. Reading the promotional descriptions of Les Extravagants, I expected Bois Fuchsia to be my favorite of the four, because it includes so many notes that I typically love. When I wore it, I didn't exactly dislike it as much as I was confused by its close similarity to the niche classic L'Artisan Parfumeur Mûre et Musc. There's the black currant and the musk (with the secondary notes of berries and woods) and there's the exceptional staying power, too.

Promotional copy aside, none of these three fragrances (or Vanilla Paradoxe) strikes me as a rose-themed composition. However, they do feel more contemporary than most of Rosine's previous catalogue, and they also read as more gender-neutral, with Eloge du Vert skewing slightly "masculine" and Bois Fuchsia reading a little more "feminine" due to its fruity notes. Personally, I'll still cling to Rosine's more rococo rose scents (and their tassels!). However, if you're not already wedded to that aesthetic, Les Extravagants may be your entry point into the brand.