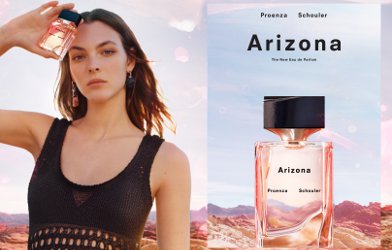 Proenza Schouler recently launched its debut fragrance, Arizona, a "radiant" scent that conjures "feelings of liberation to find a greater truth. . . a respect and love of nature, and a sense of unbridled freedom." Arizona was developed by perfumers Loc Dong and Carlos Benaïm and includes notes of white cactus flower, orange flower, orris, jasmine, solar accord, musk and cashmeran.

Designers Jack McCollough and Lazaro Hernandez, the duo behind Proenza Schouler, have said that Arizona was inspired by a trip to the deserts of the American Southwest and some much-needed time away from Wi-Fi. Hernandez has commented, "We wanted something that was a classic scent, that conveyed the luxury of disconnecting—a little bit far away, an art-world feel, a little bit out West, something grounding. People want to escape right now and get back in touch with the core elements, I think.”1

Sounds good! I've never been to Arizona, but I do need to unplug more often, and fragrance is one of my favorite tools for reflection. So how does Arizona make me feel? Well, it opens with an accord of citrus and sheer vanilla that I'd call "artisanal creamsicle." That worried me a bit, since I didn't expect much sweetness. After about ten minutes, Arizona's heart is more of a salty amber with a hint of iodine and a few jasmine petals. The "mineral" notes that were mentioned in some press about this fragrance are subtle; there's a "hint of the metallic buzz that frequently accompanies iris," as Robin once described it. Arizona's base is a comfortable skin-scent of sandalwood and vanillic resin note.

Arizona doesn't necessarily evoke the desert for me — it seems too smooth and cozy for that dramatic terrain. However, it's well-balanced and very wearable, even if it feels more like an autumn scent than a summer scent. It's not as "niche" as the Proenza Schouler guys have claimed, but as usual, that's no surprise. If you're a fan of Hermès Eau de Merveilles, you may like Arizona as a more carefree option. If you loved and miss Calvin Klein Reveal (as I do!), you'll probably find Arizona very appealing. It has moderate sillage and good staying power: I applied Arizona at 9 in the morning, and I thought it had faded away by the afternoon, but apparently I was wrong. A co-worker noticed it at 3 pm, complimented it, and identified it something different than my usual office scent.

One question I ask myself when a fashion brand launches a fragrance is, "How well does this perfume capture this brand's fashion style?" However, I'm a little stumped in this case. Other than being generally aware that Proenza Schouler is a cool-girl American brand, I don't know offhand how to describe Proenza Schouler the way I can describe Miu Miu or Alexander McQueen or even Tommy Hilfiger. When I read its name, I can only think of actor-comedian Drew Droege's "Chloé Sevigny" character (loosely inspired by the actress), who (like her real-life namesake) frequently name-drops Proenza Schouler.

I know the real Chloé Sevigny is a longtime fan of Comme des Garçons Rose. Would she wear Arizona? Possibly. Is it a cool-girl fragrance? Maybe, if the cool girls finally lose interest in Le Labo Santal 33. I'm neither young enough nor cool enough to be a Proenza Schouler muse (like Chloé), but I'm enjoying my sample of Arizona and I'd recommend it for an easygoing mental vacation.

1. Noor Brara. "Proenza Schouler Brings Arizona to New York for Its Fashion Week Fragrance Launch." Vogue, February 11, 2018. (I'm not sure how the "art world" fits into this concept, unless it's a very indirect reference to Marfa, Texas or to Georgia O'Keeffe's life in New Mexico, but there you go.)