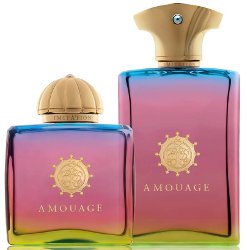 An interpretation of those rare moments when life mirrors art, Imitation is the highly anticipated fourth chapter of the second cycle of the Amouage narrative by Creative Director, Christopher Chong. An intensely personal exploration of New York City in the 1970s, Imitation is inspired by Chong’s childhood memories and his first experiences of a city filled with graffiti, neon lights and a boiling pot of cultures, shaped the way he sees and understands art today.

Imitation Woman ~  "An olfactive imitation of New York City’s multiculturalism in the 1970s this floral aldehyde fragrance is a tribute to an iconic era." The notes include rose, ylang ylang, orange blossom, jasmine, blackcurrant, aldehydes, liquorice, incense, sandalwood and patchouli.