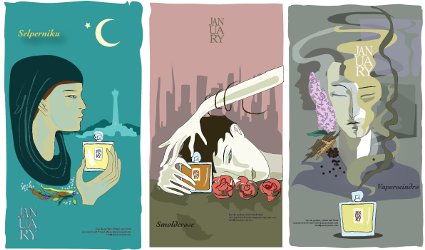 Sometimes the way to my nose is actually through my eyes: I was initially tempted to try Vaporocindro when I saw January Scent Project's retro-styled illustrations by the line's perfumer, John Biebel (who's also a visual artist). They remind me a bit of Guerlain's classic 1935 "Is She Your Type?" advertisements by Elise Darcy, with a surreal twist. I like the overall dreamy mood of the Vaporocindro image (shown above right), plus the sinuous lines of scent encircling the androgynous central face and the mysterious profile to the left.

January Scent Project's visual materials also allude to the fragrances' notes, and with this image we're given a preview of this scent's "wood, spice and flower" profile. Vaporocindro's composition includes notes of lilac, green leaves, apple, turmeric, black pepper, jonquil, mahogany, cedar, agar, davana, black currant, cumin, coffee, sandalwood and ambergris. In addition, the "vapor" and "cinder" of the scent's Esperanto-like name hint that this isn't going to smell like a mainstream fragrance.

Vaporocindro's florals appear up front, with a honeyed lilac. The floral theme doesn't stand alone for long, though: it's quickly joined by a sharp fruity note, a thread of smoke, a hint of something mineral, and lots of black pepper. The smoke, in particular, makes me think of Vaporocindro as an "industrial lilac," as though I'd stumbled across a lilac bush growing in an abandoned factory yard, rooted in gravel and dusted with soot.

For its first hour or so, Vaporocindro is pretty intense and would likely draw attention from anyone nearby. Its dry down is more subdued: the smoke dissipates, allowing the woods and spices to emerge (and if you're not a cumin fan, don't worry — it's not strong enough to dominate). Hours later, I'm left with a muted but very pleasing blend of lilac and jonquil. We've left the factory yard; now I feel like I'm indoors, looking at a vase of cut flowers in a dimly lit room. (The gray-tinged colors of the Vaporocindro illustration are very accurate for this scent.) The sillage gradually diminishes; the staying power is above average. 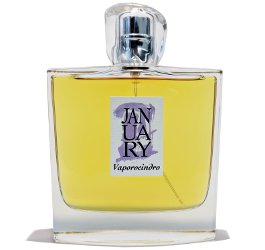 As you've probably guessed by now, Vaporocindro isn't a typically feminine or springlike lilac; it feels nothing like Dawn Spencer Hurwitz La Belle Saison or Frédéric Malle En Passant. It's a more experimental, dirtied-up take on the flower. Back in October, Angela wondered, "Could 2017 be the year of the deconstructed tuberose?" Borrowing that terminology, I'd call Vaporocindro a "deconstructed lilac." It's probably not for everyone, but it should appeal to those who are in the mood for something unexpected this winter.