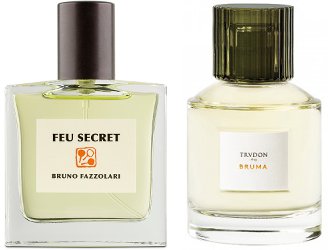 As September draws to a close — where has this year gone? — I'm trying to catch up on the year's releases. Here are two more, and look for more multi-scent reviews over the coming month.

Secret fire of the alchemists: the elusive scent of iris root smolders with spice, cedar and smoke in a transformative hidden fire. Bright, joyful, ardent.

My goal with Feu Secret was to allow a sort of hidden warmth to shine through the cool surface of orris butter and to stay true to the rooty-woody aspects that I find so compelling.1

Feu Secret is from artist and indie perfumer Bruno Fazzolari, and I'm surprised I haven't seen more mention of it in the comments here. Fazzolari's descriptions are right on target: after a brief but bright citrus opening, this is a warm spiced iris, given some lift by the hemlock spruce and eucalyptus (other notes include turmeric, pink pepper, himalayan cedar, birch tar, vanilla), and just a wee tad smoky — you'll be reminded of incense, but you won't feel you've been marinated in campfire. Likewise, it is earthy / rooty, but doesn't move into turnip territory, and there is a touch of sweetness in the base, but it's not so sweet (or heavy) that it would sit in my cabinet gathering dust.

It's unisex and the lasting power is good.

Verdict: Fantastic. If you like iris, do just try it. It would slot neatly into 5 perfumes: iris fragrances for fall, but I've also worn it happily through the heat of summer (yes, I've been meaning to write this review for months). It will definitely make my best of 2017 list, and my buy list, although I almost never buy anything and I might not buy this either. But I'd love to have a little duo of travel sprays of this one and the (also fantastic) Lampblack.

Bruma contains a distinguished, almost animal-like sensuality. In the night, a feminine rider draws inner strength from the elements that surround her: her horse and the depth of the forest at night seem to give her a magnetic and carnal aura. [...] An icy solstice, Bruma feeds on the moon and the forest to evoke the inner metamorphosis of a character in contact with the nature surrounding her.2

Bruma was my early favorite of Cire Trudon's debut set of five fragrances (I've already reviewed Deux). It is named for the Latin word for solstice,3 and was developed by perfumer Antoine Lie. It starts with a buttery iris-violet, liberally peppered, but it stays airy and chilled, in an entirely different register than the earthier, rootier Feu Secret (the notes: black pepper, lavender, galbanum, violets, peony, iris, jasmine, labdanum, vetiver, tonka bean). After the top notes fade, it's an airy sheer-ish floral, only a little green, and not about iris at all, really, although some vague thread of cosmetic powder remains through the dry down. While it is mostly pale and clean-ish, there is just enough vetiver in the base to give it an earthy finish — not quite what I'd call an "almost animal-like sensuality", but close enough.

Anyone could wear it, but it leans closer to feminine than masculine (thus, perhaps, the "feminine rider"). The lasting power is ok but not wonderful.

Verdict: Bruma is beautifully done. It's modern, and it's elegant and wearable (and seasonless) without being at all stupid. It smells exactly like what it is — an expensive fragrance from a chic French brand that you can't find at Macy's. If I had to work every day in an office, and I wanted to smell good without smelling like everyone else on the street and without offending my co-workers, Bruma might be exactly the sort of scent I'd choose. On my way out the door every night, I'd layer on a spritz of perfumer Yann Vasnier's invigorating incense, Mortel, to shake off the worries of the day. (Then, later, relaxing at home, I'd be in Bruno Fazzolari Feu Secret.) It would, really, be nicest to have the coffret (all five Trudon fragrances in 10 ml sprays for $110), as I do like all of the five, even the powdery spice-fest Olim, which I hated on first sniff but have slowly started to appreciate.

1. First quote via the fragrance description, second quote via Orris Butter: The Phantom at the Bruno Fazzolari blog.

2. From the fragrance description.

3. The brand says it is named for the Latin word for solstice, anyway. I don't speak Latin, but I think bruma actually refers to the winter solstice and/or the shortest day of the year.