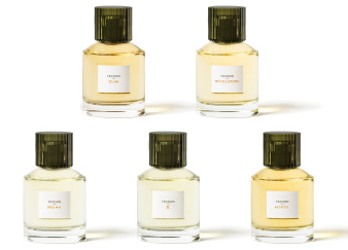 Bruma ~ developed by perfumer Antoine Lie. "Bruma contains a distinguished, almost animal-like sensuality. In the night, a feminine rider draws inner strength from the elements that surround her: her horse and the depth of the forest at night seem to give her a magnetic and carnal aura. Bruma (“solstice” in Latin) is intrinsically tied to the sun. And to royalty. An icy solstice, Bruma feeds on the moon and the forest to evoke the inner metamorphosis of a character in contact with the nature surrounding her." With black pepper, lavender, galbanum, violets, peony, iris, jasmine, labdanum, vetiver and tonka bean.

Olim ~ developed by perfumer Lyn Harris. "Olim represents the vanity and emotion of a royal era. Powdery notes touch on beauty; spices evoke decadence and resins hint towards opulence. Olim refers to a form of purity with an underlying richness. Olim (Latin for “once”) recalls the first four registers of the old Parliament of Paris, including the numerous texts and laws delivered to the King’s court between 1254 and 1318 under different reigns, particularly St. Louis (1214-1270). Olim shines light on the evolution of royal power and the decline of 13th-century French feudalism." With bergamot, lavender, anise, pink pepper, clove, patchouli, benzoin, myrrh and musk.

II ~ developed by perfumer Lyn Harris. "II is about new beginnings; the life of a forest that permeates through the seasons. It is sensually symbiotic, bringing elements together: a Cologne that inspires and points at a magical place. II is the alliance par excellence, the unique link that ties two beings together. II transcends and calls to the pious, revealing its fragrance like an emerald impulse." With green leaves, orange bigarade, pine, pepper, juniper, cedar, incense, ambroxan and cashmeran.

Revolution ~ developed by perfumer Lyn Harris. "Revolution is a fragrance that permeates the skin, and builds up on human emotions throughout the day. It blends in, leaving an air of mystery and intrigue around the body. The streets of Paris during the French Revolution, an odour of smoke and musket powder. Rage and intense emotions on the faces of the crowds. Houses are afire, the cobblestones awash in oil, sweaty riders are robed in black leather. A touch of incense softens the air, suggesting peace is near." With elemi, angelica, cedar, papyrus, patchouli, cade, incense, cistus and opoponax.