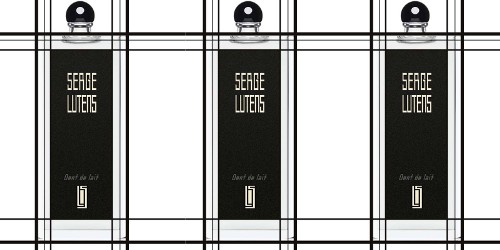 Changes are afoot at French niche house Serge Lutens, in case you didn't get the memo. What was once the "export line", that is, the scents you could buy in the rectangular 50 ml bottles, is soon to be "Collection Noire", in 100 ml for €180.1 Some of the fragrances from the export line have been shuffled into what was once the "exclusive line", that is, the bell jars. The Vapo series, in which "exclusive" fragrances were made widely available in 30 ml travel sizes, is possibly gone. Maybe some scents have been discontinued altogether, maybe they haven't, I've heard both cases stated with authority.2 Reports of the brand's fragrances being significantly reformulated have been around for years now, and that is true of so many brands that perhaps the time has come when you should never replace a bottle of anything without smelling a new tester first.

None of this really matters much to me. I haven't adored a new Serge Lutens scent in years,3 and I have so much perfume that I'll possibly never need to replace any of my old Lutens favorites, plus, many of my favorites are already reportedly not as good as they used to be. So, whatever. I'm not even sure why I went out of my way to get a sample of the new Dent de Lait — I guess wanting to try the latest Serge is just a conditioned reflex by now, although my even stronger anti-luxury reflex has successfully kept me from losing even a second of sleep over the Section d'Or series. I have not tried a single one.

I am not going to do a blow-by-blow review of Dent de Lait, either, and I'll give you the verdict in advance: I hated it. What we know from the brand is that it was inspired by childhood, and reportedly the notes include milk, metallic notes, incense, heliotrope and almond. What it smells like to me is an aldehydic floral, very clean, with nuances of almond, dried milk, and baby powder or baby lotion. There is a touch of plastic baby doll head early on, and a dash of laundry detergent mingling with sweet milk in the later stages. Some reviewers have found it disturbing:

A metallic note, aldehydes, lends a sharpness that seems sudden and violent, like the local anesthesia’s worn off and the dentist’s sharp sickle probe is poking right through. Figuratively, it’s like breathing in the comforting scent of childhood, with a hint of foreboding and unease in the background. — Refinery29

With a scent like blood, teeth, and candy, it’s unlikely that Dent de Lait will become many people’s signature scent, not even for the Tooth Fairy. Unlike other baby-related perfumes, you probably won’t want to spray it everywhere. It’s too bittersweet a fragrance, and too uncomfortable, as it makes you to recall one of the first times you tasted blood. —  The Cut

I guess I found it disturbing too, but I found it disturbing in the same sort of way I find most very clean scents disturbing (and baby scents, like Love's Baby Soft, are a subset of the clean category). In fact, the first thing I thought of was that Dent de Lait would fit neatly into the Clean line: Clean Toddler, perhaps? It smells an awful lot like a functional product — I get that same "dentist’s sharp sickle probe" sometimes just walking down the laundry aisle in the supermarket. Still, I found Dent de Lait considerably less disturbing and easier to wear than (shudder) Laine de Verre, and I would guess that if you've enjoyed the Serge Lutens Eau series, or if you like clean fragrances in general, you might like Dent de Lait much better than I did. You might even find it worth the hefty price — to me, the most foreboding element of all is that they're charging €180 for what is essentially a sweet milky musk.

Serge Lutens Dent de Lait is €180 for 100 ml. I think the official launch is in September, but you can buy it now on the Serge Lutens website.

2. For more information, the long post Major Changes at Serge Lutens at Kafkaesque is the most comprehensive I've seen on the subject.

3. I should note that I have liked a few (La Fille de Berlin comes to mind right away). But unless I'm forgetting something, the last one I really wanted to own was 2008's El Attarine.