And the raw materials Caroline used are irrelevant. The scent is the scent. If you need to know what's in it, "You" is probably not for you.1

That's Chandler Burr, who is familiar to perfumistas as the author of Emperor of Scent and The Perfect Scent, as the New York Times' perfume critic from 2006 through 2010, and as a "curator of olfactory art". The "Caroline" is perfumer Caroline Sabas. The "You" is You or Someone Like You, Burr's new fragrance under the auspices of French niche line Etat Libre d'Orange, and named for Burr's first novel. Unbeknownst to Burr, Etat Libre d'Orange did post a few of the fragrance notes online (rose, mint, herbs), but they were removed shortly after, and I can vouch for the fact that they were not all that helpful.

And indeed, that's often how it is with fragrance notes. I've blathered on about that before so won't belabor the point here; suffice it to say that two fragrances with those same notes — rose, mint, herbs — might be entirely different animals. Burr elaborates in an interview:

Using notes is an incredibly impoverished way of “understanding what a scent smells like." It is the equivalent of understanding a painting by...

Q: By saying it has lots of reds and blues?

Exactly. Or what a musical work sounds like by saying "D minor." It doesn’t tell you anything about the work. Thom Yorke can write in D minor. And so can Beethoven. And you will have two completely different works of art.2

The "works of art" here is key to understanding his approach, and to his quarrel with the ways in which brands, consumers and the media approach the subject of perfume. If you will bear with me, here is one more:

Unfortunately most editors at the 'beauty books' demand mind-blowingly superficial writing. They send their people on canned, prefabricated press trips paid for by the brands to visit the same fields of roses that were shown to them the previous year. They do pieces on 'scent wardrobing' as if it had never been done before when actually it's the 400th rehash. They list 'notes of jasmine, cocoa butter, nougat, and fresh tulip' and crap like that and think they're writing about perfume. The only way to talk intelligently about a work of art is as a whole and contextualized in schools, aesthetic styles, and technical mastery or lack thereof.3

So what does all that mean for me, the lowly perfumer blogger, dutifully repeating long streams of fantasy notes, day after day, and trying to describe the finished product to her readers? Well, nothing much. To be clear, I have no quarrel whatsoever with Burr. I have found his books entertaining and helpful, and the same goes for his reviews in the Times. He says perfume is an art, and I am sure some perfumers would agree with him, although many others are on record as saying no, perfumery is a craft. Perfumistas sometimes get into heated debates on the matter, but the outcome is not really of much interest to me.4 Whatever perfume might be, I am a consumer and a hobbyist, nothing more. I don't write for the Times, I write for other people like me: my tribe, if you will. I don't go on prefabricated press trips, and I pay for my own perfumes. What I want, similar perhaps to the decorator who asks if the Koons will match the color of the sofa, is to find perfumes I might like or possibly want to purchase. Then, I want to enjoy them before they turn to vinegar. And I want to do all that without going bankrupt. I "curate" my own collection based on my own tastes and my budget, and while my tastes are hopefully at least somewhat informed, I don't buy fragrances based on technical mastery. I buy fragrances that make me happy.

The problem for a hobbyist, as I see it, is not so much art vs craft, or aesthetic styles and contextualizing in schools, although in practical terms, it does help you navigate the fragrance counters if you know some basics: the difference between a floral and an oriental, say, or the lineage connecting Lancôme La Vie Est Belle to Thierry Mugler Angel. But the monster problem facing the hobbyist is what to smell when you can't smell everything, and really, you can't, not when 50 new fragrances are added to the pile every week. You need a way to make sensible choices. I want Allure to tell me "jasmine, cocoa butter, nougat, and fresh tulip", and if Allure would just add "you won't notice the jasmine, this is a sugary gourmand similar to X but not as well done, and it costs too much plus the whole thing disappears before you've finished your tea, so do try Y instead" then there's a good chance I never would have started blogging at all.

Burr's Untitled series, which repackaged existing fragrances in plain glass bottles (no branding, no names, no notes) was fantastically cheeky, and even Women's Wear Daily has gotten into the act, with a regular "Smell Test" feature presenting a panel of judges with an unmarked sample vial. I am all for it, in theory. Ideally, we'd all smell everything "blind", with no preconceptions, and if the fragrance industry ever goes back to 50 or 100 or 200 fragrances a year — not likely — I would sign up to do all my testing from lab bottles. But to help me decide which of the 2500 new releases for 2017 I might want to smell? Thanks, but no. Give me branding, packaging, notes, prices, and I wouldn't mind knowing who holds the license and the name of the perfumer. I'll even read your wacky stream-of-consciousness backstory.

Which brings me back to You or Someone Like You. Is it a work of art? I have no idea. Did I like it? Yes. It's a slightly offbeat but easy-to-wear green floral, with the emphasis on the green more than the floral. It smells dewy / watery but not conventionally aquatic, and not at all watered down: it's almost chewy in the top notes. While it does not smell exactly like anything you will find outdoors, it has a bright, casual, summer-y, "manufactured nature" aura that's a perfect fit with the novel's Southern California setting. It's definitely minty, but the rose probably won't come to mind unbidden, and the mint is only a part of the story.5 The base is a pale woody musk, mostly clean. If you want to know what else is in it, you'll have to turn to the excellent site Scent and Chemistry, where they apparently think the raw materials are very relevant indeed:

This is where Sabas' perfume sets in by painting the exotic but odorless palm trees in the olfactory picture of green banana leaves with Liffarome galore, of course with large open grass areas in the background represented by cis-3-hexenol and derivatives. [...] Likewise there is a minty contrast to the banana leaves; yet, where it is minty–menthol in 'Eau Radieuse' it is minty-eucalyptus in 'You', natural spearmint and carvone. What really sets 'You' apart though is the intense tingling effect of shiso leaves that smells like an overdose of Shisolia, like some 0.2% or 0.3% of it even. Shisolia turns the top into a densely green, vibrant but impenetrable exotic jungle...6

That analysis (and there's much more, do follow the link), obviously, is not geared towards casual consumers. I suspect that some perfumistas might likewise find it information overload, although they'd surely sit up and take notice at the conclusion that You or Someone Like You is "the most interesting and beautiful perfume of 2017 so far".7 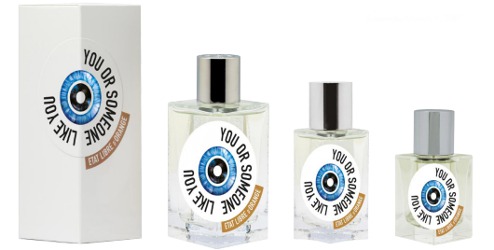 Verdict: I won't quibble with "the most interesting and beautiful perfume of 2017 so far" mostly because offhand, I can't even think of what the competition would be. Possibly, I've already managed to miss the best new fragrances of 2017? I don't think anything has gone on my buy list yet, and while I am impressed with You or Someone Like You (and it doesn't hurt that the little 30 ml cube is cute and reasonably priced) I did not get that dopamine rush that foreshadows the laying out of cash. In the end, that's really all I care about.

Anyway, do try it, or do comment if you already have. (And look for a full bottle giveaway next week.)

You or Someone Like You could easily be worn by anybody of any gender. The lasting power is good but it does get very soft after a couple hours.

1. From the video for the fragrance.

2. Via A Fragrance Critic on the Problem With Perfume at New York Mag.

4. But, to play devil's advocate here, what often occurs to me is that perfumers at the big fragrance & flavor companies make the scents for everything. If perfume is art, are shower gels art? What about air fresheners, and the scents used for mascara and skin creams and laundry detergents? The line between Tide and Clean Fresh Laundry (yes, that's a personal fragrance) strikes me as awfully thin. Or are perfumes only art if they meet additional criteria?

5. If you want a minty rose, you could try Les Parfums de Rosine Diabolo Rose, but be warned, it's far daintier than the name would imply. If you know of other minty roses, do comment.