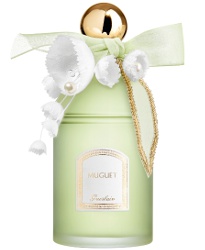 Guerlain has launched their annual limited edition version of Muguet. The fragrance celebrates the May Day tradition of offering sprigs of lily of the valley to loved ones.

This year's model features an older Guerlain bottle rather than the usual limited edition design. The muguet flowers around the neck were made by Maison Legeron; both the flowers and the ribbon were embellished by French embroidery house Atelier Bizet.

(via guerlain, found and additional information via Monsieur Guerlain at Facebook)