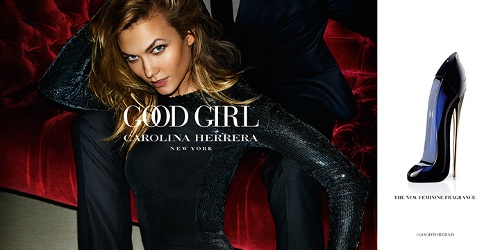 It has been the top-selling fragrance among multiple countries for three consecutive months. The launch is also their largest of it’s [sic] kind for the United States in 20 years. The initial sales projection for the fragrance has since been shattered, now corrected to reflect roughly $200 million in its first year.1

[Jose Manuel] Albesa [of Puig] said Good Girl is “breaking historical records.” The eau de parfum has doubled both sell-in and sell-out objectives in all markets and has been top selling female fragrance in several countries for three consecutive months, he added.

It’s unclear whether the success is due to the scent’s atypical packaging (it’s housed in a teetering stiletto bottle); a racier than usual marketing and advertising campaign with a tag line of “It’s So Good to Be Bad”; the juice itself (jasmine is a key accord, like many of the house’s fragrances that came before it), or a combination of the three — but it’s working.2

Who knew? It's easy to forget how entirely unrepresentative our scent of the day polls are — best selling fragrances sometimes pass perfumistas right by. Often, that's for good reason, but since I'd heard little enough about Carolina Herrera's new Good Girl either way, I figured I should give it a shot. My quest was made easier by the fact that Good Girl has done so well they brought it to the US last December, over a year ahead of its originally scheduled debut.

Good Girl was inspired by "the duality of women" ("We can be both good and naughty", Carolina Herrera Baez assures us)3, and the floriental blend (representing the "opposition of light and dark") was whipped up by perfumer Louise Turner. The notes: jasmine, tuberose, cacao, almond, coffee and tonka bean. The bottle is surely love-it-or-hate-it, and despite my general predilection for kitsch, I'm firmly established in the hate-it camp. It's rare that I see a bottle that I dislike so much that I'd have a hard time buying it even if I loved the juice, but Carolina Herrera has crossed that threshold. It would take some serious artistry to get me to buy a fragrance packaged in a shoe.4

So, what does it smell like? Good Girl opens strong and sweet, and while it calms considerably, the sweetness is there to stay. There is a bit of bright fruity-berry citrus in the top notes, but it's quickly overtaken by the floral notes, which are, I suppose, the promised jasmine and tuberose, done here very much in the department store style: fresh and crisp, no indoles, no rough edges, and not much depth despite the loud tone. The dry down is quieter, and while it never loses its sweetness, it's less of a gourmand than I expected. The coffee is nearly missing in action, and the chocolate and almond are just a whisper. It just smells like the base of your basic mainstream oriental, with the usual creamy-sweet vanilla, musk and woods, decorated here with a judicious drop of almond extract and a few chocolate shavings.

Verdict: I won't have to worry about the stiletto bottle, because I'm not going to lose any sleep (or money) over Good Girl; on the contrary, it will be no easy thing to remember what it smells like two weeks from now. It's wearable if not my style, but it's not what I'd call sophisticated, much less distinctive or memorable. It could use a shot of coffee, and maybe some more bitter cocoa powder, and perhaps another handful of almonds.

My vote: the "teetering stiletto bottle" is selling the juice.

4. Although from what I can see on the internets, the love-it camp is much larger. People appear to adore this bottle. If you love it too, do comment and tell me how crazy I am.