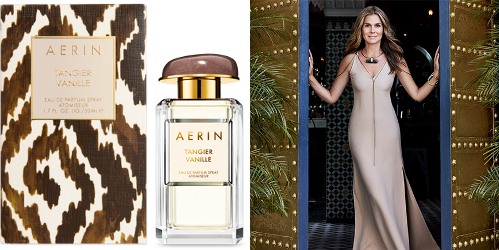 Morocco is a magical destination—I'm so inspired by its colors and culture. I also associate it with a cover shoot by Jonathan Becker I did, along with my father, for Town & Country magazine. I love those photographs, they really capture a sense of place—I wore an amazing brown and blue Rochas dress that echoed the backdrop of desert and sky.1

That's Aerin Lauder, talking about the inspiration for Tangier Vanille, which she released under her casual-luxe Aerin lifestyle brand last year. Of the fragrance itself, Lauder promises that it "opens a secret door that leads you into the mystery and splendor of Morocco".

Cultural appropriation is nothing new in perfume marketing, and Morocco, of course, is fertile ground. If there is any harm done by taking a nice deep whiff of Serge Lutens Chergui and imagining yourself in an exotic / romantic Moroccan landscape that glosses over colors and culture and plenty else besides, so be it: I am sure I have been guilty of something similar as recently as yesterday, and I am not going to stir that pot. If you want to imagine a exotic / romantic Moroccan landscape, let me gently offer you up Chergui, and if that does not float your boat, perhaps you might consider Serge Lutens El Attarine or Comme des Garçons Ouarzazate? But if what you want is to imagine yourself in Morocco, doing a photo shoot with Jonathan Becker for Town & Country while wearing an amazing brown and blue Rochas dress, you probably need something altogether different. I'm not quite sure what perfume will suit, but I am dubious that Tangier Vanille is quite magical enough to do the job. (Mind you, I can think of very few things I would like less than to be on that photo shoot. Still, let's have some fun: do take a look at the cover below, and tell us what fragrance you'd be wearing?) 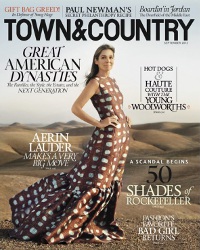 Tangier Vanille opens with bright citrus and fruity jam, plus a few vague flower petals which may or may not be the "rich Bulgarian rose" promised in the fragrance notes. It softens quickly into a middle-weight woody amber musk. There is vanilla, but it's lighter than I would have expected. It's not foody at all, and it is no more than mildly spicy. The base is creamy, with just a smidgen of powder, and there is a definite, but not overwhelming, undertone of PlayDoh, which you will either like or you won't. It's rather quiet (and mostly linear) after the first 20 minutes, although the PlayDoh does fade to a more basic dry woody musk after a couple hours.

The lasting power is ok but not stellar. Tangier Vanille is being marketed to women but I would call it a unisex.

Verdict: If I was smelling Tangier Vanille blind, I would not have guessed that it was meant to be a vanilla fragrance, much less that it costs what it does. Tangier Vanille did not call up the mystery or splendor of Morocco, and I did not think it was particularly elegant or sophisticated. All of that aside, I found it reasonably attractive and wearable. My favorite of the line so far is still Evening Rose, but Tangier Vanille is now in second place. That's not necessarily saying a whole lot, given that neither of them came even close to making my buy list, but still. Tangier Vanille would make a decent sort of no-brainer comfort scent for cool weather, and I'm sure it will find fans (or, I should say, has found fans — I'm awfully behind).

Other than the PlayDoh, Tangier Vanille is fairly similar to Aerin Amber Musk, so you might want to smell both before you buy. If you're mostly after the PlayDoh, you might want to try my personal favorite in that category, The People of the Labyrinths Luctor et Emergo. If you were after a casual light vanilla, you might consider Diptyque Eau Duelle.