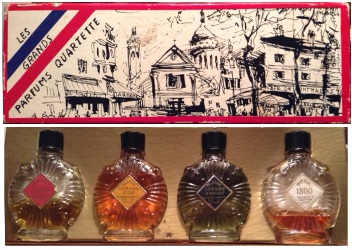 Sure, quality sells fragrance, but I believe emotion is a more powerful marketing tool, especially among non-perfumistas. For example, take the vintage drugstore perfume set. You’ve probably seen them gathering dust in thrift shops or in the back of linen closets at estate sales. They’re usually a set of small bottles by a perfume house you’ve never heard of, and they’re packaged in a box that reeks of downmarket glamour — something that might be advertised in the back of True Romance magazine or sold at a Wichita bus station gift shop during the Truman administration.

In short, I adore them. This week at The Needle, one of my favorite thrift stores, I scored Les Grands Parfums Quartette, a boxed set of four fragrances: Charles V Cheval Bleu, Charles V 1800, Elizabeth Hartley Cordon d’Or, and Elizabeth Hartley Cordon d’Argent. They all boast “parfum” on their labels, as well as “dist. New York,” which I’m interpreting to read as “manufactured in New Jersey.” The stylish and friendly Myrna, who works at The Needle, also passed along two empty vintage drugstore minis that stoke the same perfume lust: “Irresistible” out of Jersey City, featuring the silhouette of a smooching couple; and the noble-looking No. 3 by Park & Tilford, adorned with a gold foil label.

Admittedly, the perfume in Les Grands Parfums Quartette is old and smells it, but I’m confident that its fragrance is not what sold the box. My guess is it was the romance.

First, let’s take the perfume houses in the box, Charles V and Elizabeth Hartley (listed as part of Charles V in the online Perfume Intelligence, one of the few references to Charles V I found). Charles V sounds classy, doesn’t it? “Charles” is obviously a king, and the “V” sounds so much better than “the fifth.” It’s almost as good as Prince Matchabelli. Never mind that Charles V was a 16th century Holy Roman Emperor and probably didn’t have the eco-sanitize cycle on his washing machine or access to roll-on antiperspirant. As for Elizabeth Hartley, she must have been a proper lady, too — not old, not young, but really just about anyone who knew her way around a fish fork. Perfect for a perfume house name.

Now, we’ll move on to the box’s art. It’s a drawing of Paris, the long-respected home of great perfume. You see Sacré Coeur and two cafes, La Bohème and Café de Montmartre. (In the upper right corner, I barely make out “Paris ’64.”) In purchasing this box, you’re taking home the good taste and culture of a country steeped in the good life. 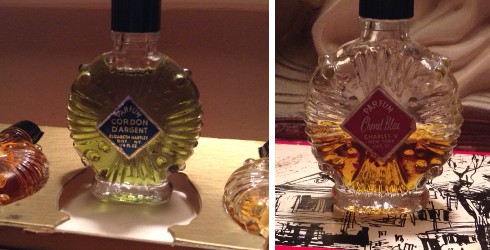 Then we come to the names of the fragrances themselves: Cheval Bleu, 1800, Cordon d'Or and Cordon d'Argent. Cheval Bleu might be the name of a fancy wine or five-star hotel and connotes good taste. Its English translation, “Blue Horse,” doesn’t cut it for a perfume, especially a ho-hum orange flower with a touch of amber. 1800 screams “history.” Surely Napoleon might have worn it? He might as well have worn Cheval Bleu, since it smells so similar, if a bit less green. Cordon d’Or and Cordon d’Argent sound like prizes awarded in a grand contest. Despite its name, Cordon d’Argent is virulently green and might be a mash-up of Cheval Bleu and 1800. Cordon d’Or is the gold ribbon winner in my opinion, as a bright floral that would make Elizabeth Hartley proud.

Perfume marketing today works to the same effect, but in a slightly different way. Instead of Irresistible’s couple kissing under a red arch, we have videos of a bronzed 17-year-old dressed in Gucci at a nightclub. Instead of references to European kings and Paris, we have full-page magazine ads of Majorca villas, bikini-clad models and radiant starlets.

I already know that as much perfume as I’ve bought, I’m not the modern perfume industry’s target market. A big perfume house can make more money selling tens of thousands of bottles of La Vie est Belle to people who buy one or two bottles of perfume a year than to the relatively few of us who have actual furniture dedicated to storing our fragrance but who demand a beautifully crafted scent.

But for the marketing (but usually not the perfume!) give me the old drugstore boxed set.

Hanging Out at the International Perfume Bottle Association Conference
26 Vintage Fragrances Every Perfumista Should Try
Perfumista tip: how to find perfume at thrift stores