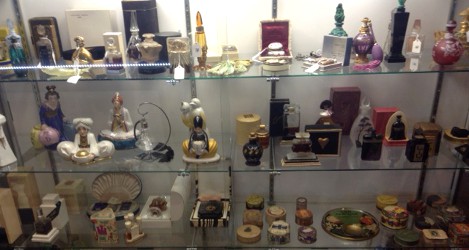 This year, the International Perfume Bottle Association convention was held in Portland, Oregon, just a short bicycle jaunt across the river from where I live. Normally, I’m more interested in a perfume bottle’s contents than the bottle itself, but the convention was open to the public for a “Perfume Bottle & Vanity Show and Sale” on Saturday. I went, and, boy, am I glad (more on that later). 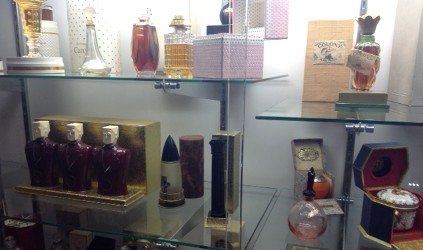 The perfume bottle sale was held in a ballroom, flea-market style, in the bowels of a hotel. I stopped at the first table I saw to get the scoop on the sale from Joan Walter, a specialist in German porcelain perfume bottles.1 She said that perfume bottle collectors loosely fall into two camps: those who collect bottles from manufactured perfumes — prize findings might be an old Nina Ricci Farouche bottle, for instance, or a 1920s Jean Patou Colony bottle [see image just above, far right on top shelf]; and those who seek out perfume bottles made to be filled by their purchaser with whatever fragrance they choose. 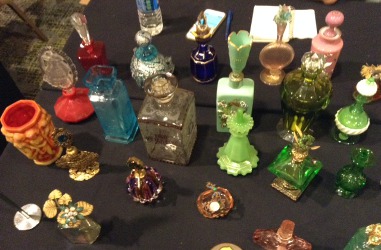 People who collect bottles made to be filled by the purchaser might specialize in a number of different types. Some people love Czech glass, while others buy only Murano glass. Some people stick to atomizers with glamorous tassels. Still others collect bottles by Lalique or Baccarat or other famous crystal houses — or scores of other possibilities.

The vendors seemed to mostly know each other and traveled between tables to joke around, examine wares, and, in one case, “conduct research on Tabu.” The “vanities” portion of the sale was mostly compacts — new this year, according to Pauline Turco, who has been collecting perfume art bottles for 58 years — perfume ads, powder, and hand-beaded purses. One woman sat alone at a table with her book on Crown Perfumery.2 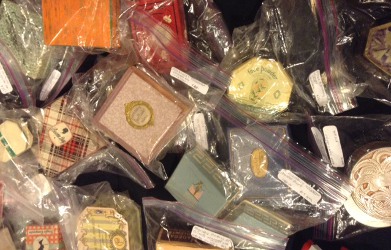 In the next ballroom, the really fancy perfume bottles were on display [see top 2 images; the image just above shows powder boxes]. It wasn’t open to the public (except a troop of Girl Scouts, who I hope earned a Chanel No. 5-shaped badge for their tour and lecture) but I managed to persuade someone to let me in. Here were the ampoule bottles of Miss Dior and enough 19th-century French atomizers to populate the Rockettes’ dressing tables. 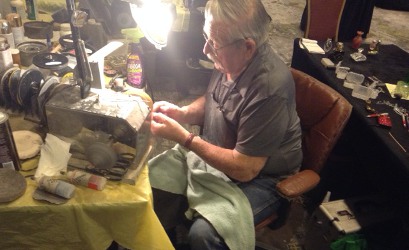 In the corner beyond the Girl Scouts, “the Glassman” Leo Sampson was holding a bottle’s lip to a grinder. “I’m not cheap, but I’m good,” he said. I told him I wasn’t cheap, either, and he shot back, “But you can be had, eh?” Leo, his wife, and their dog travel from Buffalo, Wyoming, to the conference each year, and members know to bring their chipped stoppers and bottles to him. 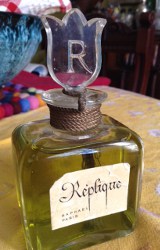 Among the perfume bottles for sale in the first room were a number that still held perfume. I bought a huge, sealed bottle of Raphael Réplique, probably from the 1940s. The perfume is still grass green, but I haven’t been able to get the stopper out yet. I'll report back on that later. I also picked up minis of Bal à Versailles parfum and Parfum d’Hermès Eau de Toilette.

Plus, on a lark, I bought a full, unmarked bottle for two dollars. I didn’t recognize it — it held an ounce and was shaped like a squat U. The dealer said that the perfume’s name had been on the top of the lid, but it was gone. The bottle’s glass stopper, surrounded by a metal collar, was still in place. I found an identical bottle on the table, but this one had its lid, and it said “Guerlain.” But, Guerlain what?

I got the bottle home and discovered that the stopper was still wired in place. So, the bottle had never been opened. After a bit of messing around, I loosened the stopper and dabbed on the perfume. It smelled spicy like carnation, but full of stemmy narcissus and plumped with Guerlinade. On a hunch, I went to my perfume cabinet and dabbed something next to it. Presto. Vol de Nuit extrait.

1. She wrote a book about this type of bottle, The Crown Top Book: German Porcelain Perfume Bottles, 1920-1939.

The Museu del Perfum
Glamour Icons by Marc Rosen ~ perfume books
The Art of the Bottle: an interview with Pierre Dinand