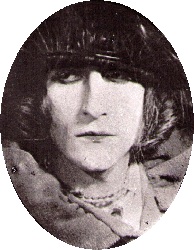 As a New York City local, I've enjoyed observing the growing wave of independent fragrance lines based in the borough of Brooklyn. CB I Hate Perfume may have been one of the earlier and better-known names to set up shop, but now there are enough options to suit various tastes. One relative newcomer is Ellis Brooklyn, founded by Bee Shapiro, a former corporate lawyer and current beauty writer for The New York Times. I recently received a sample of Ellis Brooklyn's Rrose in a Sephora order and gave it a try.

Rrose is a rose-centered "olfactive ode to Rrose Sélavy (a pun of Eros, C’est la Vie), the feminine alter ego of the author, artist and provocateur Marcel Duchamp." It was developed for Ellis Brooklyn by perfumer Jérôme Epinette, and its composition includes top notes of lemon, cassis and pear; middle notes of lotus blossom, peony and centifolia rose; and base notes of cashmere woods, spring musks and vanilla orchid.

Yes, you're remembering correctly: another fragrance dedicated to Duchamp's stylish and mysterious feminine persona was released in 2016. That was Maria Candida Gentile Rrose Sélavy, which Kevin reviewed back in May. As someone who has spent a lot of time around art by Duchamp and his contemporaries, I completely agreed with Kevin's assessment: it's a smart and surprising composition that could be worn by men as well as women.

What about Ellis Brooklyn Rrose? This fruity floral is a very different fragrance: it's a fresh and dewy rose-peony bouquet with hints of citrus in the intro and sheer synthetic woods in the dry down. Rrose has moderate sillage and above-average staying power on my skin. The main problem? I can't find any olfactory-conceptual link between this fragrance and the original Rrose Sélavy. Duchamp fans won't find this scent odd or compelling enough to hold their interest, and women looking for a pretty rose-peony perfume may be put off by the idea of some old French artist in drag. Basically, Rrose by any other name would make more sense to me.

Otherwise, there's nothing to dislike about Rrose, and if you're a fan of fragrances like Jo Malone Peony & Blush Suede and you want something longer-lasting, this could be worth a sniff. It's not ground-breaking, but it seems well-made and I prefer it to most mainstream pink "rose" flankers, from Dolce & Gabbana Rosa Excelsa to Tory Burch Jolie Fleur Rose. (The latter had me looking around wildly for hand sanitizer when I tried it yesterday in Sephora.)

A cranky side note: if I had any fragrance-related wishes for 2017, one of them would be a ban on promotional copy like this: "When Bee became pregnant with her baby girl Ellis, she found there were no options out there for the luxury fragrance lover who also sought non-toxic formulations..." First, the origin story of motherhood inspiring a desire for "green" personal care products is completely played out; second, there's no shortage of anything for fragrance lovers, especially in the "luxury" bracket; third, the use of "non-toxic" is vague and misleading. Rrose is a very pleasant scent, but it's about as natural as it is Duchampian.*

* The website does specify that Rrose does not contain parabens or phthalates and that the cap is "biodegradable and contains no petrochemicals".