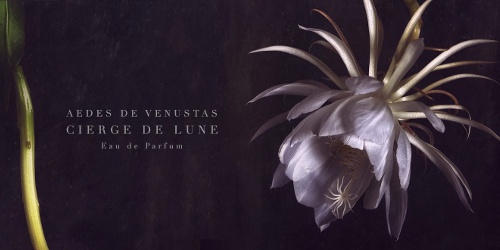 Not every perfume is a groundbreaking work of art. It’s best that way. Some fragrances earn their keep as supporting characters — everyday auras that hum along and let you provide the personality. They’re flexible perfumes friendly to just about any situation, mood, or season. They’re “go tos” when you don’t want to think too much about a scent, but simply want to spritz one on and forget about it.

Perfumes I count on to fill this role include Guerlain Vol de Nuit, DelRae Mythique, Caron Nocturnes, Bois 1920 Sutra Ylang, and, to some extent, Chanel No. 5. If I had a bottle, Hermès Eau des Merveilles would join the line up. For someone who loves amber, Aedes de Venustas Cierge de Lune might be a solid choice for this kind of “aura” fragrance.

Perfumer Fabrice Pellegrin developed Cierge de Lune, and its notes include Madagascan vanilla absolute, hedione, pink pepper, black pepper, ambrox and suede accord. It’s a fairly linear fragrance that unrolls an all-day, plush, layered, woody-amber-vanilla glow. Wearing it is like pulling on cashmere socks in the morning. You set it and forget it. Cierge de Lune will purr each time you catch a whiff from your scarf or reawaken it while doing dishes in warm water. It’s on the job.

On first smelling Cierge de Lune on a tester strip at Fumerie, the first image that came to mind was of a satinwood side table. I smelled amber, vanilla, and wood softened with a dusting of finely milled powder, and the combination was almost visually golden. But, like satinwood, the fragrance was intriguingly three-dimensional. Sometimes amber shimmers, but Cierge de Lune glowed. It was radiant yet intangible, like body heat left behind in bed or — okay, this is less romantic but maybe more accurate — the puff of heat that blows past your neck and cheeks on opening the oven. After wearing it on skin three days, my initial impression stayed true.

And, man, does Cierge de Lune go and go. If you value persistence in a fragrance, you’ll like this one. However, the flip side of a persistent scent is that it can be fatiguing. It can wear you out. And some notes, like amber and vanilla, have to tiptoe a tightrope to avoid falling into nausea. To me, Cierge de Lune is sheer enough to succeed, but others might be more sensitive than I am. 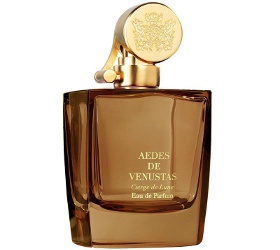 One more note: Cierge de Lune’s texture reminds me of that of Donna Karan Cashmere Mist and Laura Mercier L’Heure Magique. Despite its vanilla absolute, it feels a bit chemically induced. That might be what gives it its softness and glow, sort of like how fleece robes are so soft, yet have nothing to do with actual fleece. Wearing a fleece robe, you might luxuriate in its cuddliness, but you're never fooled that you're wearing anything but recycled soda bottles.

Still, all in all, if you’re looking for a well-crafted, warming, vaporous, all-purpose scent, and you like amber and vanilla, be sure to put Cierge de Lune on your list.