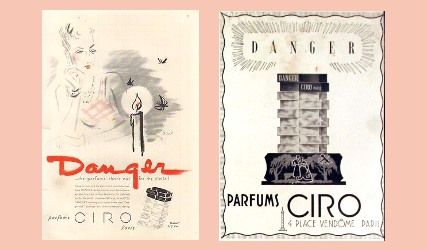 Perfume lovers seem to fall into one of two camps about vintage fragrances. Either they seek them out, eager to try many iterations of their favorites; or they avoid them, fearing that they’ll fall in love with a perfume they’ll never smell again. I fall into the “better to have loved and lost than never loved at all” camp. Usually, that’s fine. I mean, there’s always another good perfume coming along, right? But when my 1.25 dram bottle of Parfums Ciro Danger extrait runs out, my heart will break.

Danger, released in 1938, is a rich, dark rose with an animalic edge. I have to wonder if it was inspired by Schiaparelli Shocking, released the year before. The big difference is that Danger’s rose is balanced by helpings of cinnamon and lavender. The result is seductive and romantic, but intriguingly odd. Aren’t the most beautiful people like that?

I don’t know how old my tiny bottle of Danger is, but certainly older than fifty years. As you might expect, its top notes have turned to the smell of damp cardboard. (I’m starting to like that smell, just as I like the smell of old books. It’s my nose’s soundtrack for anticipation.) After a few minutes, it burns away, and Danger's signature of rose, cinnamon, and lavender takes center stage.

Underlying this spicy-herbal rose is a regular Golden Age of Hollywood cast of notes: amber, sweet sandalwood, honey, musk, moss, resins, and a touch of civet. And probably lots more. Without the wit the lavender and cinnamon adds, Danger would simply be another beautiful, predictable rose done in a grand style.

The lavender and cinnamon, swaddled in ambery sandalwood and musk, continue until the perfume fades, hours and hours after putting it on. Maybe because this is the Extrait, it wears quietly but stays lush on my skin. As the rain and cold move in in my part of the world, I’m loving wearing Danger. I think it will take well to cashmere sweaters, vintage coats, and silk twill scarves, especially if their colors are rich and patterns just a bit off-kilter.

Ciro Danger is long discontinued. Do any of you know of an herbal-spicy, dark rose fragrance you can recommend? If not, do you know any perfumers we can beg to make one? (I’m only half joking. Sigh.)