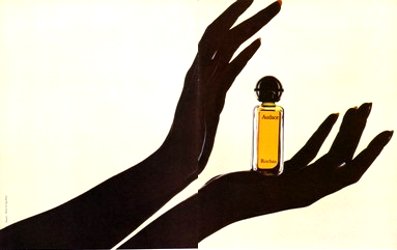 Last Friday I was leaving Powell’s when a street fashion photographer asked to take my photo. Now, I’m not a particularly fashionable dresser. That afternoon, I was wearing a variety of clashing plaids — a Pendleton skirt and a jacket from a Western wear store in Oklahoma among them, both culled from Goodwill — and a 1940s floral silk scarf. (I will point out that my boots were pretty great, though.) “Me?” I asked the photographer. “This?”

That’s how I feel about Rochas Audace. On paper, it reads like a strident jumble of notes. On skin, it works. Audace is both crisp and warm, piney-green yet floral with a breath of moss and hint of powder. It’s old fashioned in the modern way Myrna Loy is old fashioned. It’s my new winter favorite.

Audace’s notes include bergamot, juniper, galbanum, rose, jasmine, orris, carnation, violet leaf, jonquil, oakmoss, pine, patchouli and amber. It was one of a trio of perfumes offered for sale at the couturier in 1936 (the others were Air Jeune and Avenue Matignon; see image below) and was taken off the market when World War II began. Rochas re-released Audace in 1972, but discontinued it again in 1978. This review is of the 1970s Parfum de Toilette and Extrait.

Audace Parfum de Toilette launches with aldehydes, citrus and a whiff of fir branches. Just as I’m adjusting to the freshness, sweet amber mutes any hint of manly cologne, and oakmoss infuses the fragrance with an almost leathery feel. But Audace isn’t a Givenchy III clone. A full floral heart gives real curves to what could otherwise be a flat-chested gamine of a perfume. Just the tiniest grain of powder lends elegance. Still, the juniper is there, and the amber continues to warm the fragrance.

Audace is a breed of fragrance that doesn’t seem to exist anymore. It’s beautifully blended, doesn’t draw attention to itself, yet has character. It’s a real perfume. It wouldn’t snare consumers at first sniff — at least, not shoppers who aren’t experienced with scent. It doesn’t broadcast, “Hey, I smell like mandarin sorbet, or tingly flowers, or caramel ice cream, or ‘sexy’ patchouli and fruit. Buy me.”

Instead, Audace is the kind of fragrance that would have been a woman’s signature scent. On smelling her coat or scarf, her children wouldn’t say, “This smells like jasmine or rose or Chanel No. 5.” They’d say, “This smells like Mom.” It’s individual, yet of-a-piece. The mainstream market doesn’t seem to make these sort of subtle-yet-present fragrances these days, and I doubt many commercial companies would brave Audace’s blend of juniper, wet flowers, amber, and moss. 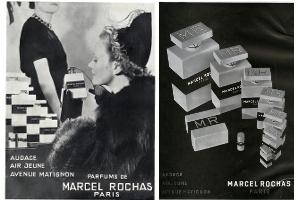 It’s easy enough to toss together an outfit that doesn’t follow fashion but might show some style. For fragrance, select niche lines and vintage often that play that role. I guess the savviest perfume wearers aren’t always the most fashionable.

If you can point to some mainstream yet classic, subtle perfumes with style if not fashion, please comment!

Rochas Audace is discontinued and is ruinously expensive online. Keep your eyes peeled at estate sales.