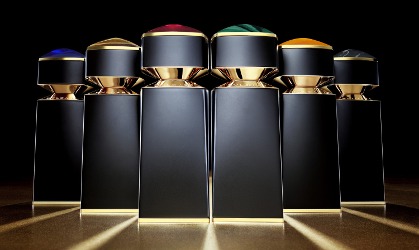 Ambero ~ Woody oriental. "Amber from shores of the Mediterranean Levant. The resplendent glow of Kahraman Amber is the most ancient, natural treasure of the Mediterranean Levant. The scent is a tribute to the Phoenician god, Melkart, a paragon of masculinity revered from Levant to Spain, who carried a wonderful shield made of Amber as a symbol of power. A warm Woody Oriental that translates the richness and sensuality of Amber into noble, earthy, Vetiver root, generously composed of its most fragrant portion. Modernized with the spice of Ginger, Pink Pepper and Saffron, and refined with elegant Olibanum incense, AMBERO is startlingly luminous and round."

Garanat ~ French oriental. "Red Garnet from Bosphorus. A name who conveys masculine strength and forerightness. GARANAT is inspired by the deeply red Garnet from Bosphorus. This crimson gemstone shines in the darkness, bringing its wearer the impassioned courage and vision of Suleyman the Magnificent, the most seducing Sultan of the Ottoman Empire. A dense, spellbinding swirl of ardent masculine Rose and smoked chiaroscuro Incense. Essence of Damascena Rose and Rose Absolute from Grasse entwined with pure, noble smoked Incense create a mesmerizing fragrance of supreme masculine force."

Gyan ~ Woody oriental. "Blue sapphire from Kashmir. A name in Sanskrit, meaning “divine wisdom”, GYAN evokes velvety blue Sapphires imbued with the spirituality of the midnight sky in the Himalayas and the seductiveness, lucidity and insight of Alexander the Great. The celestial blue mystery of Sapphire is expressed by a nocturnal starlit Jasmine Sambac and a near limitless abundance of Indonesian Patchouli. Mingled with Oriental incense, this aristocratic and masculine fragrance possesses an incomparably sophisticated trail."

Malakeos ~ Fougère musk. "Malachite from the Ural. Emblem of the grandeur and opulence of Czarist Russia, ruled by the Romanovs, the infinite green of Malachite gemstone exudes the healing and well-being of nature, set in the profuse coniferous green of the Ural forests. The Perfumer honors a legendary thematic in men’s perfumery, Fougère, in a contemporary reinterpretation. This deeply invigorating scent has a cold, clean, vegetal freshness derived from men’s barbering classics. Minty Geranium, Lavender, and Oakmoss are vividly paired with gentle Musk and Guaiac Wood for an immensely restoring, sensual green fragrance."

Onekh ~ Oriental Oud. "Black Onyx from Middle East. An impenetrable black gemstone of powerful and ambivalent energy reserved for the strong-spirited. ONEKH, an ancient Levantine word that meant Onyx long ago, derives its mystery from Naram, the first Mesopotamian king, and god of the moon. The magnetic, night-black ambivalence of Onyx is sublimely illustrated by Malacensis Oud from Laos, an ingredient more valuable than gold, whose aura is as bewitching and supernatural as this blackest of gemstones. Leathery, animal and spicy, this natural Oud yields a dry yet sensually addictive quality when allied with Labdanum and warm ambery Resin."

Tygar ~ Ambery citrus. "Tiger’s Eye from India. Called the stone that sees all, shimmering golden-brown Tiger’s Eye draws its energy from the vibrations of the earth and sun. Like the name of the fragrance, this bright stone is inspired by the majestic feline, and conveys the fiery courage, action and mental power of the great Indian warrior Shivaji. An astonishingly contrasting and explosive Ambery Citrus accord crafted from radiant, cascading Grapefruit, deep Wood and Ambrox, a natural and abundant reconstitution of precious Ambergris."