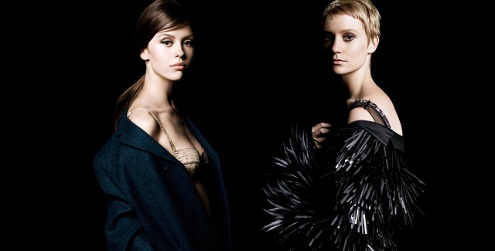 It's seemed a long slog through sweet and pink and fruity lately, so I was happy to turn to La Femme Prada even before I actually smelled it. A not-pink fragrance, for grown-ups, from the (mostly) reliable team of Prada and perfumer Daniela Andrier? Even if it didn't turn out to be a "grand floral that restlessly shakes off the clichés of femininity", much less "innocence undercut with carnality", that's got to beat an awful lot of what we've seen on perfume counters this year.

The notes – frangipani, tuberose, ylang ylang, spices, beeswax, vanilla, vetiver — likewise sounded right up my alley, and the advertising, featuring four models generally conducting themselves with dignity, is very Prada and near perfect.1 La Femme itself starts fruity and a bit sharp, but it resolves fairly quickly into a feather-soft, warmish floriental — not, to me, a grand floral, or even a white floral, but a soft, seasonless floral with a slightly creamy, almost-but-not-quite beachy character. The flowers are declawed, all of them, and done in blurred, dewy tones of peach and gold; none of the floral notes in particular stand out. The finish is velvety, with a tiny nod to Infusion d'Iris, and the base is a quiet woody musk with a mostly clean vetiver note. The whole thing is sweet and vanillic and honeyed, but quietly so: it doesn't smell like a gourmand.

The lasting power is ok but could be better. 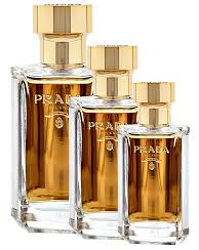 Verdict: In its favor, La Femme Prada is a not-pink fragrance, for grown-ups. It is pretty, and quite wearable, and reasonably sophisticated. I wish, perhaps, that it was not quite so dignified? It could use a little more carnality, or some humor (à la Prada Candy), or something.2 As it is, it teeters dangerously towards bland. It strikes me as a fragrance for someone who does not wish to call attention to their fragrance, but even within those confines, I can think of better, more interesting choices (Infusion d'Iris being one obvious contender). Shame, because as usual Prada has done a lovely job with the packaging.

Note: review of L'Homme Prada coming up on Friday.

1. Miuccia Prada explains why there are four models: "So we have two actresses and actors that play three or four roles each. Ideally, this is the main concept: that there isn't a single icon representing the dream of a woman or a man," she added. "It is actually the opposite, that these people represent the reality, the differences and so on." Via Prada Launches New Fragrances at Harper's Bazaar.

2. Then again, Allure calls it "sultry" and says it "oozes sex appeal", so your mileage may vary. See 5 New Products We're in Love With This Week.