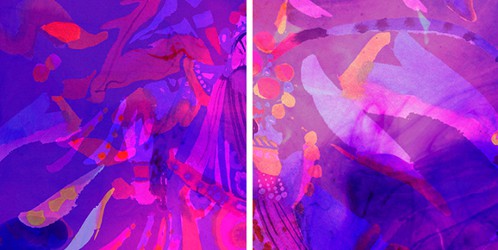 Amouage gives us two takes on Myths Woman. The first is the one-liner describing the fragrance: "Inspired by surrealism, Myths for Woman paints its floral and green facets with an expression of dark nuances shaded with an ambivalent tone." (If you can decipher this, let me know.) The second is this video, loaded with swirling red fabric and music that reads as “Asian tribal.”

I agree that Myths Woman tells a story, but to me it has nothing to do with surrealism or swirling fabric. My impression is of Barbara Stanwyck in the pre-code classic, Baby Face. (Here’s the film’s trailer. You can consider it my take on a video clip for Myths.) In the movie, Stanwyck plays Lily, the good-hearted daughter of a tavern owner. After having been prostituted by her father, she decides to leave town and use her power over men to get ahead. Like Lily, Myths Woman is heartbreak and smoked cigarettes over girlish hope. (And that is my one-liner for it.)

Amouage classifies Myths Woman as a green floral and lists among its notes narcissus, violet leaves, galbanum, carnation, patchouli, ambergris accord, leather, moss and musk. In a nutshell, it smells like a powdery narcissus wrapped in a velvet cloth spritzed with Jean Patou 1000 and Mona di Orio Cuir. I want a bottle.

After spraying Myths Woman, for a split second I smell diffuse, tart green. It’s almost instantly overtaken by sepia-toned leather, hay and dirty ashtray with a hint of soap hanging around its edges. I’m not one of those people who automatically sees colors when she smells something, but a sniff of Myths Woman as it begins to settle unspools a black-and-white movie in my head. We’re in a dark bar with men wearing fedoras and women who don’t get enough sunlight. Dangerous things are happening.

Slowly, the fragrance’s narcissus rises, pivoting Myths toward a more classic feminine fragrance, but still with lots of composting violet leaves, moss and animalic funk hanging over it like a stained chiffon scarf. Now we’re in the heroine’s boarding house room, and the elevated train rumbles nearby. Her dressing gown needs mending. It’s seen better days. So has the heroine. You can tell that she was beautiful once, and she cleaves to her ritual of bath powder and perfume, but the years have been rough on her.

Eventually, the narcissus takes full stage, and the cigarettes and leaf mold retreat to just a whiff. Myths Woman’s narcissus will never have the joyful prettiness of, say, Parfums de Nicolaï Le Temps d’Une Fête, but now it smells much more like a straight floral. Myths Woman wears all day long and while I wouldn’t call it quiet, it isn’t an attention-hog, either. 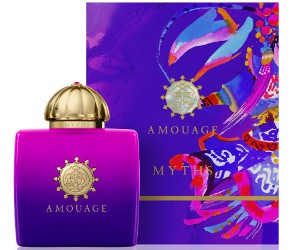 Maybe because it’s so unlike my life, I’m drawn to the drama in Myths Woman. I like it that it doesn’t pander to the crowd who takes its beauty easy to swallow. I don’t want to be Lily in Baby Face — who would? — but I sure enjoy the movie.