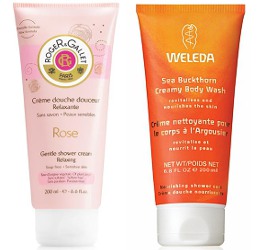 I love scented shower gels, and since I do use up every bottle I buy, I have way less guilt about buying plenty of them than I do about buying more perfume — I don't even need Donatella's absolution. Here are quick reviews of 4 current favorites (Roger & Gallet Rose, Weleda Sea Buckthorn, Lush Happy Hippy, EO Grapefruit & Mint) along with a quick poll.

I love cream-formula shower gels in winter: they may or may not be less drying, but they certainly feel less drying on my parched winter skin. A kind person gave me a tube of Roger & Gallet's Green Tea Gentle Shower Cream, and I liked the gentle but decently-sudsing formula. The fragrance, however, was too aggressively clean for my taste. I figured I'd give the Rose a shot to see if it could be a decent winter alternative to Lush Rose Jam, which as we all know has chronic availability issues, and is not exactly a bargain. As it turns out, no. The rose fragrance is as gentle as the cream formula. I would call it rosewater-ish, so probably plenty enough rose for most people, but not nearly enough for a Rose Jam addict looking for a fix. My solution: use a nice dollop of the Roger & Gallet and add a little tiny pump of the Rose Jam to give it some verve. Perfect.

Roger & Gallet Rose Gentle Shower Cream is available in 200 ml tubes, and can also be found in Roger & Gallet's Shiso, Green Tea, Fleur de Figuier and Amande Persane fragrances (they make "regular" / non-cream shower gels for all the rest of the fragrances). I think the retail price in the US is $23, but I paid around $15 for mine.

Another gentle cream formula that's perfect for cold weather, and I have always loved Weleda's Sea Buckthorn fragrance, which is a lively (much livelier than the Roger & Gallet) sweet citrus creamsicle (I mentioned it in the creamsicle post) with slight herbal undertones. The matching hand cream was my staple until I got tired of the metal tubes splitting in my purse (does anyone know if they've switched to plastic?) and I can also vouch for the Body Oil, which is lovely to have if your skin is dry, but do use it up before it spoils: I stopped buying the oils because I used them so rarely that I never managed to finish a bottle before it went off. (If you like oils, do give the Wild Rose a sniff too. It also comes in the Creamy Body Wash, and that might be my next purchase.)

Weleda Sea Buckthorn Creamy Body Wash retails for $10 for a 200 ml tube, but like the Roger & Gallet, can be found at discount. I paid about $7 for mine. The Creamy Body Wash is also sold in Pomegranate, Wild Rose and Citrus. 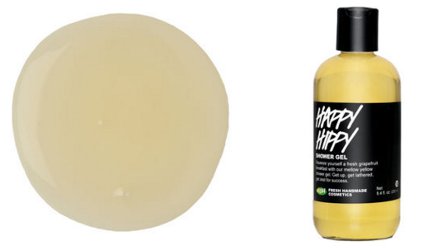 The last time I went to a Lush store, my aim was to try the Don't Rain on My Parade Shower Gel after Jessica reviewed it; sadly, I was not a fan. But on a whim I tried Happy Hippy again, and I was immediately hooked. I don't know if they've reformulated it (I swear I tried it before and didn't fall for it) but unless I'm mistaken the color does seem different: I think it's less bright yellow than it used to be? Anyway, it's advertised as a pink grapefruit, but it's more of a citrus blend with grapefruit and bergamot, so that it's bright and cheerful but not really all that tart or tangy. The bonus, which I don't really notice until I'm using it under hot water, is just enough frankincense to give it what Lush calls "some grrr". Sometimes I amp up the incense by putting a little Nesti Dante Villages & Monasteries soap on my sponge under the Happy Hippy, and sometimes I mix it with a little Rose Jam. It's not a "big" scent — it does not really last on skin, nor does the sillage fill the bathroom and float into the hall like Rose Jam — but it lives up to its name.

I've been using EO products for a long time. Then (eons ago) Luca Turin wrote something about EO's Rose & Chamomile shampoo, and I, along with many others, ordered a bottle, and while I was at it I got the conditioner too. I've never been fond of EO's haircare products, and these turned out to be no exception, but I liked the herbal, just-shy-of-medicinal fragrance with a hint of rose (rose fiends be warned: it is not the other way around) so I repurposed the conditioner as shave cream (and still order it for that purpose) and bought some of the shower gel instead. It was a staple in my shower for years, until I finally got sick of it and bought the Grapefruit & Mint instead. And it's likewise now a staple. It's a quieter scent than it sounds: the grapefruit, as in the Happy Hippy, is mild and blended with orange so it's not that tart, and the mint adds a bit of an herbal zing without being at all overpowering. The scent does not last on skin, which is fine with me, and all of the EO shower gels are reasonably non-drying and reasonably priced. It's my shower gel version of a "go to" perfume.

And the quick poll: how many scented shower gels and/or bar soaps are in your shower right now? (I've got 1 bar soap and 6 scented gels.) And do share the names of any favorites!