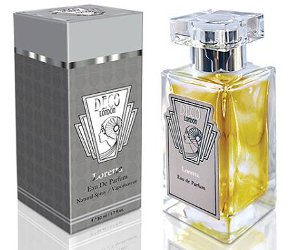 Despite the fact that so many people seem to be doing it these days, it can’t be easy to launch a perfume house. Apart from having — or hiring — the actual perfume know-how, you have to think of a concept. If you don’t have a celebrity or fashion house to hang your branding on, what will set your fragrances apart?

Sophia Fannon-Howell, founder and creative director of Deco London, settled on history. London’s 1920s, to be exact. Working with Robertet, she created a collection of six fragrances — three feminines and three masculines — that she says “blends classic fragrance accords with modern wearability and fashionable design, adds a pinch of British humour and a dose of 1920s glamour and serves up an elegant cocktail of fragrances for the ‘Bright Young Things’ of today.”

Who doesn’t want to smell like an elegant cocktail? I sampled the Deco London feminines: Constance, Loretta, and Millicent.

In my mind, Loretta is perfect for someone with good taste who doesn’t want to make a statement. No one else knows that her jacket is lined in pale green silk constructed as artfully as its wool exterior, and she doesn’t care. She wears her perfume for herself.

Millicent’s notes include bergamot, mandarin, honeysuckle, orange blossom, jasmine, lily, ylang ylang, patchouli, cashmere woods and musk. Every perfume collection seems to need to have a big white floral, and Millicent is Deco London’s entry. Except that Millicent isn’t particularly big. It’s a mature woman’s fruity gardenia-tuberose blend without the green underpinnings (Frédéric Malle Carnal Flower) or gaseous drama (Piguet Fracas) that give this sort of fragrance the character I think it demands. Millicent also carries a dose of orange blossom, which you’d think would make it smell more youthful, but makes the fragrance curiously stodgy.

Millicent does keep a shimmer going as it wears — imagine a pearlescent topaz, if such a thing existed — which, for me, is what keeps it from getting too cloying. Almost. It’s also relatively quiet for a gardenia-tuberose style of perfume. Still, if you aren’t a fan of white florals, approach with caution.

Constance’s notes include bergamot, mandarin blossom, mimosa, raspberry, rose, pink pepper, jasmine, patchouli, sandalwood, labdanum, vanilla, beeswax and musk. Constance is the spicy oriental of the bunch, and like its sisters Loretta and Millicent, it’s blended to a silky pudding and is softer and less assertive than most fragrances of its type.

Constance’s spice — a touch of cardamom, maybe? — is subtle. The warm, ambery cushion that makes up an oriental is restrained and threaded with rose petals. Up top, a piquant wisp of orange blossom (Deco London seems to love its orange blossom) balances the smooth, warm base and easygoing heart notes. Constance doesn’t have a hugely distinctive signature, but it’s easy to enjoy, like a warm fire or a shortbread cookie. I can imagine dosing myself in it on cold evenings and reaping compliments when guests lean in to hug. It burns down within a few hours to a straight amber.

That said, the Deco London fragrances do have an old-fashioned aura. Each is a graceful floral with soft edges and a ladylike feel. They smell expensive. None are especially challenging or particularly facile, either, and any of them would be at home with a Spode teapot on the table and Jeeves just a bell pull away.

Constance, Loretta, and Millicent Eaux de Parfum are $120 for 50 ml, and samples are $4 each. In the United States, they’re available at Indigo Perfumery.